The Roses of Eyam

The Roses of Eyam © Lynn Batten

Should I Stay or Should I Go? That was the moral dilemma facing 350 people in a Derbyshire village when the Great Plague started to spread through their community, rapidly and randomly killing them.

The deadly fleas that spread the infection were delivered to tailor George Vicars in a parcel of exotic materials from London, which was already in the grip of the bubonic plague by September 1665, that probably claimed more than 100,000 lives.

He was the first to die, and up to three-quarters of the population of the village became victims in the next 15 months. Most of us will recall from our school history lessons that the crisis in the City was suddenly ended by the Great Fire of 1666, which dramatically scorched both the filth in the streets, and the rats that carried the diseased fleas.

This play is based on the true events that hit the village of Eyam, pronounced Eeem, which was already troubled by the divisions arising from the recent Civil War. Some supported the Parliament, others had fought for Charles I at the Battle of Marston Moor in 1644.

In 1665, the arrival of a new rector and Royalist, the Rev William Mompesson, caused more problems. The previous rector, Thomas Stanley, an ardent Purtian and supporter of Cromwell, was still an angry resident in Eyam, and a declared enemy.

But the introduction of the plague changed everything as the village fought for survival and made a heroic decision that would save thousands of lives in Derbyshire alone.

The play is challengingly long, nearly three hours, but the story is fascinating and well told by the Stamford Shoestring Theatre, which has presented award winning material at The Minack in the past.

A big cast of 40 actors and musicians made the journey from Lincolnshire, and the four piece band, Bridget and John Skanski-Such, Chris Petze and Pete Redman endeared us at the start with a lively rendition of the Flora Dance, along with traditional folk songs from the era.

The stage was dominated by a replica of an 8th century decorated stone cross from the village, with superb Saxon artwork by John Bangay.

Director Ken Walsh and the wardrobe team headed by Lyn Walsh ensure that everything looked and sounded right, with excellent programme notes setting out the historical record.

We are soon absorbed as this tragic tale is played out. Some will leave, but most will stay to face a terrible fate at the first sign of the ‘roses’ red and vivid on skin that will erupt with boils.

Their voluntary quarantine ensured that the rest of their county was saved, with not a single known  death from the plague in Derbyshire. That was quite a decision. 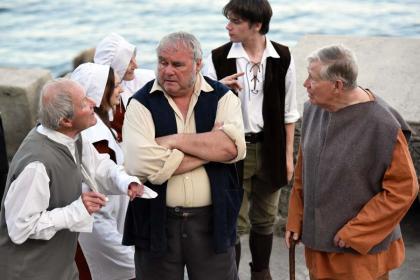 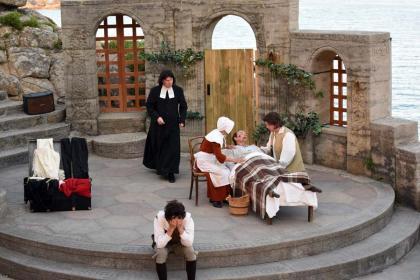 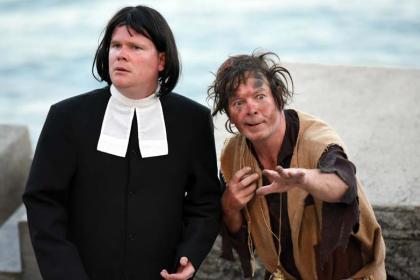 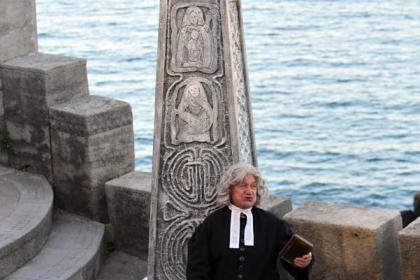 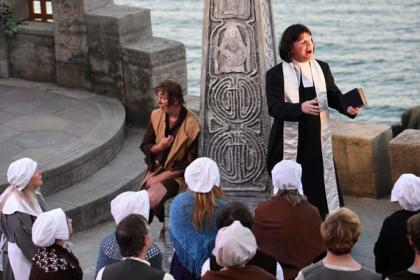 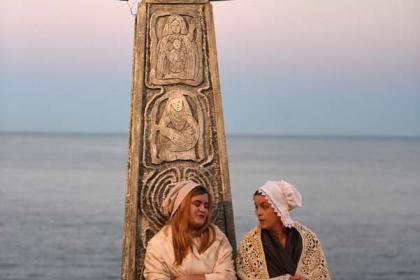 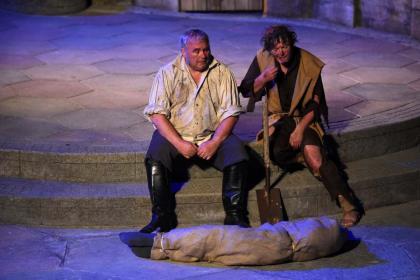 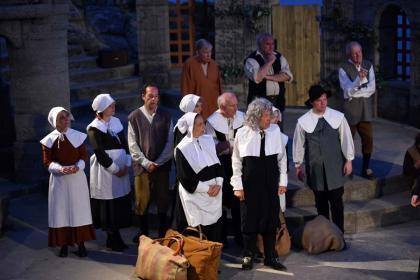 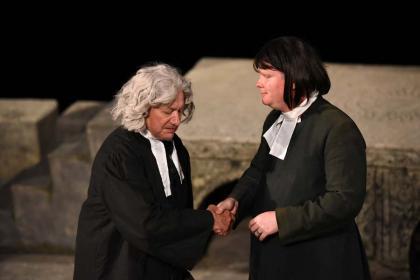