The Wolves of Willoughby Chase

The Wolves of Willoughby Chase

In the mythical reign of King James III, the snows lie deep across England and wolf packs roam the land through the winter nights.

But in the great house at Willoughby Chase there are worse dangers than hungry wolves.  Young cousins, Bonnie and Sylvia are alone at the mercy of evil governess, Miss Slighcarp and her cruel cronies.  Soon they find themselves caught up in a dastardly plot.  Can the children foil her evil schemes?  Or will the cheese-loving Mrs Brisket get them into her clutches for ever?

Only their courage and the loyal friendship of Simon the Gooseboy can help them win through until summer returns once more.

Russ Tunney's magical stage adaptation was first performed in 2010 by Forest Forge and the Nuffield Theatre, Southampton.  We are delighted that Kirstie Davis, who directed the original production, will also direct our Minack revival, which includes folk song and original live music by Ben Sutcliffe.

One peek at the decidedly off-kilter set design for The Wolves of Willoughby Chase indicates exactly what we are about to watch  -  a quirky jumble of a gothic fairy tale, with a howlingly crazy sense of humour.

The deliberately distorted setting of the great house called Willoughby Chase, features a beguilingly cosy fire-lit nursery surrounded by a snowy landscape in the early19th century.

But here, the toy cupboard door closes on cousins Bonnie and Silvia, and another one opens to reveal a wicked governess, Miss Slighcarp, who is in league with a really bad egg in the form of Mr Grimshaw, both set on stealing the childrens' inheritance.

To one side are the smoking chimneys of London City, and on all sides are pairs of round luminous amber spotlights that unerringly blink to the haunting howl of wolves, cunningly set up by lighting and production manager Simon Hutchings.

It's great stuff for both young and old with big enough imaginations to make them take a glance over their shoulders, just in case.

Writer Joan Aitken conjured up just what kids want  -  a degree of terror, tempered by silliness and idiocy from the adult characters.

The story was adapted by Russ Tunney for the stage in 2010, and original director Kirstie Davis was invited by the Minack Theatre production team to present a pandemic-delayed revival for the sell-out summer holidays.

Cornwall's own brilliant composer Ben Sutcliffe took charge of devising songs and original live music to back the thrilling action and some terrifying journeys through the snow and along icy rivers, to eventual Spring.

The cast is simply the best, switching roles and costumes at an often pantingly fast pace, as the action picks up from a sober start, to win cheers from an audience that is more than ready to get right behind them.

The winningly named Dale Superville really is super funny in all his five roles, sharing some of the best moments with the very excellent cross-dressed Ben Kernow, who needs no introduction to Duchy audiences, and the sweet voiced Danial Radze, keeper of two gorgeous goose puppets created by Mae Voogd.

The children, Alina Hulse as Bonnie, and Caitlin Dow and Juliet Colclough, who share the role of Silvia, are lively and engaging, and very funny during the academy's advanced alphabet scene. They are dressed in pinafores by costumier Marion Harrison, who also cheekily gives the governess an absurd grey wig.

The choreography by Grace Murdoch includes a well worked out umbrella chase in this winning production that keeps the wolf from the door - we hope..... 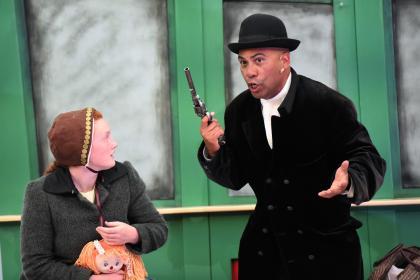 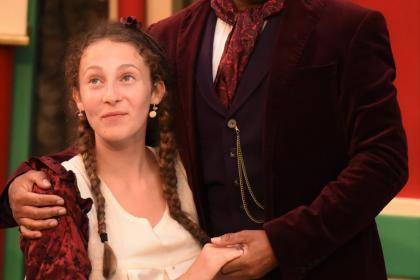 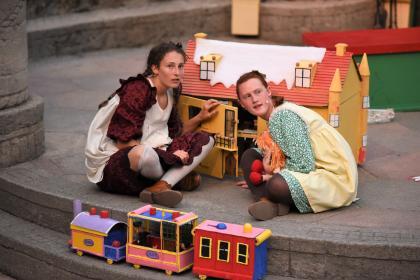 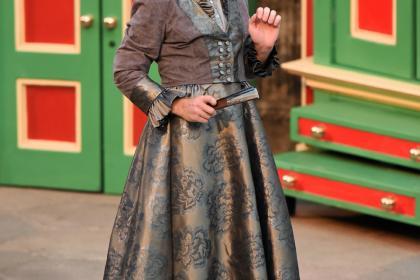 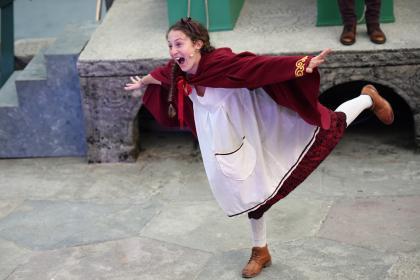 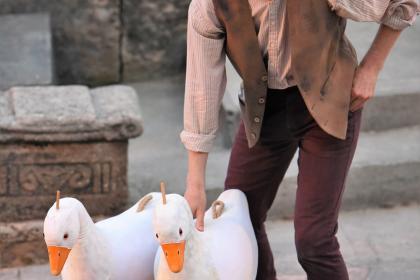 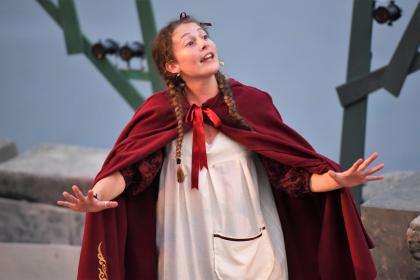 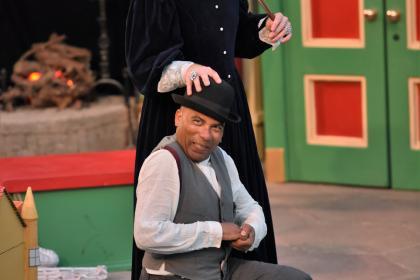 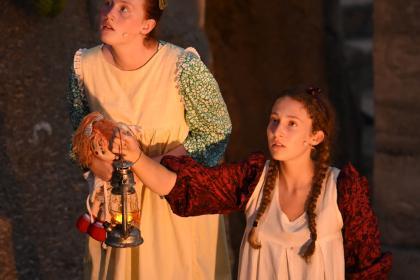 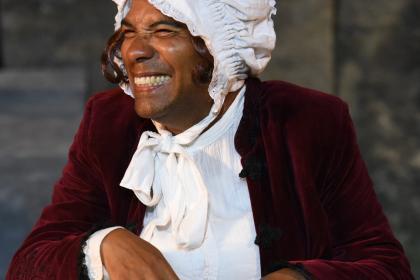 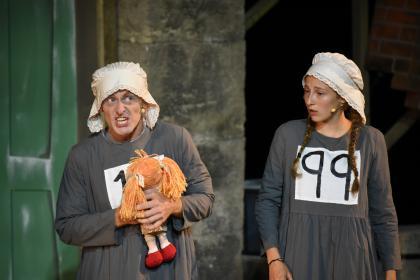 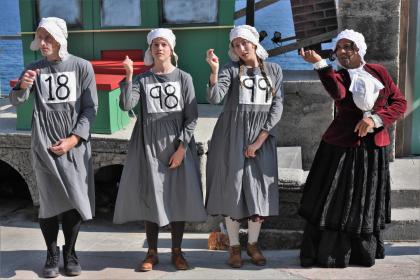 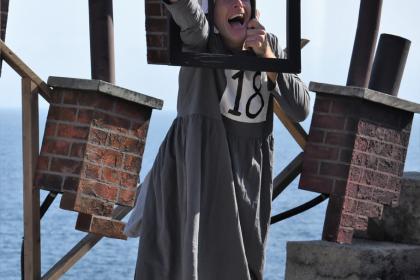 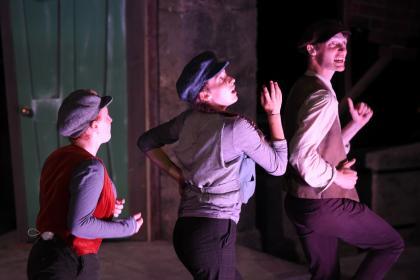 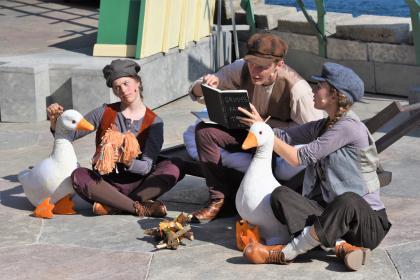 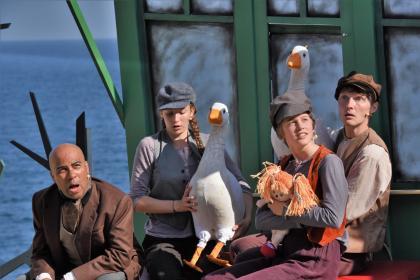 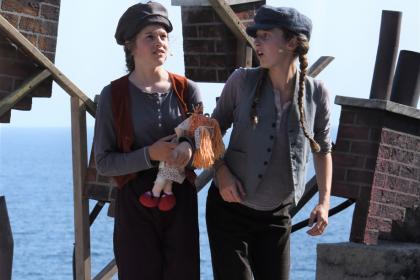 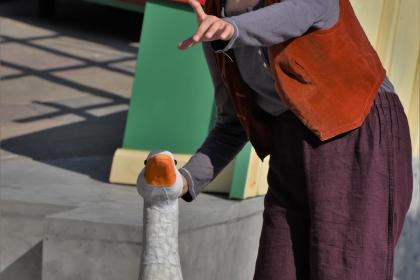 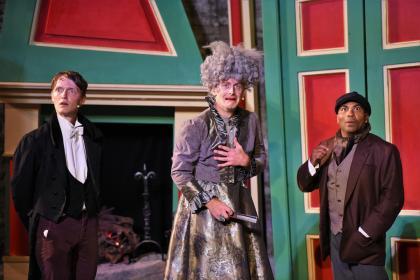 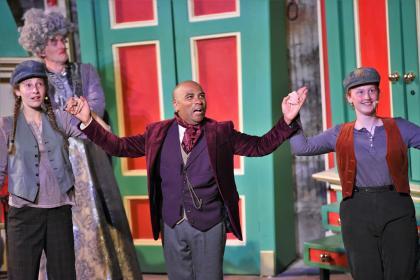