Femmes De La Mer are a 14 strong crew hailing from across Cornwall. Each individual member brings a unique sound to the group, yet it’s their blend of a cappella harmonies that has gained them recognition amongst sea shanty communities.

Lead by musical director, Claire Ingleheart, this all-female group sing traditional shanties alongside original material and some alternative takes on ballads of the sea.

The feisty women of Cornwall were celebrated by a big bunch of equally strong smiling sea shanty singers, who were given a huge welcome to the Minack by a sellout audience.

It was an exciting outing for the Femmes De La Mer who were making their first appearance at the open air  theatre, led by their beaming musical director Claire Ingleheart from Mount Hawke, Porthtowan.

The 14 a cappella singers, wearing fisherwomen's neckerchiefs, sang in finely balanced harmony in a well-rehearsed but warm and relaxed style.

Claire formed the group to sing at the famous Falmouth Sea Shanty Festival, which has sadly been cancelled for two years, due to Covid, so they were thrilled to be singing together again.

The remarkable Rowena Cade, who hit on the idea of building the theatre auditorium into the side of the rugged granite cliff next to her family home in the 1920s, was celebrated along with Anne Glanville, from Saltash, a mother of 14 children, who was also a champion rower, showing men's teams how to win races, both here and in France.

Claire has composed lively songs about her and Jenny Mopas, who rowed the ferry between Malpas and the Roseland, carrying pigs to market and also taking trippers across the river to dance at the Coinage Hall in Truro.

Her research work with English Heritage and the Cornish Library has sparked her interest in the women's largely forgotten lives, and she has also written a song about the better-known Dolly Pentreath, the Mousehole maid.

Claire's daughter, Saffron, 20, the youngest member of the choir, was one of the soloists with the rhythmic Bones In The Ocean. Franki Baseley sang Blood Red Roses, Jaime Lock and Meredith Owen, Magpie, and Jo Tracey, Howling Wind.

Nicky Stephenson and Delyth Calvin-Thomas were soloists with their leader, who also dedicated songs to Bill Mitchell of Wild Works  -  and to Minack director Zoe Curnow and her team.

They might sing about stormy seas, but they are surely embarked on a smooth and successful voyage. 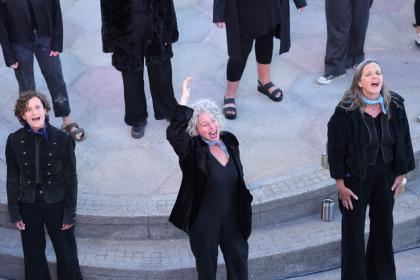 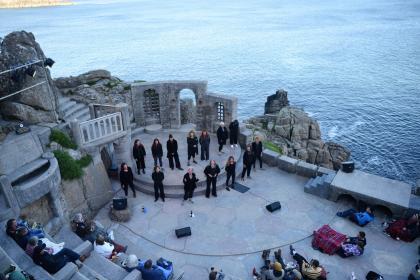 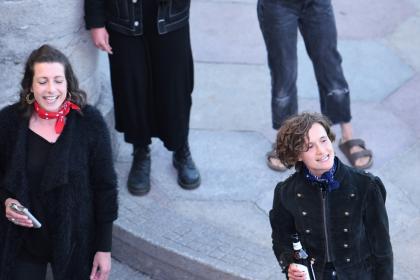 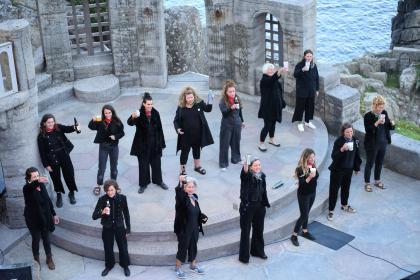 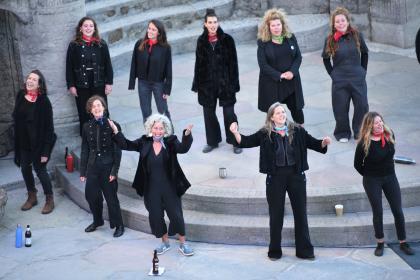 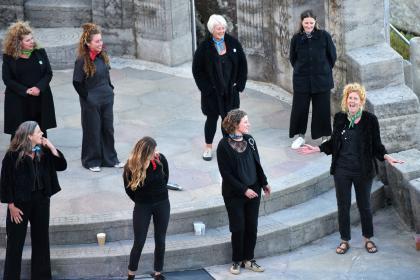