The Beauty Queen of Leenane

The Beauty Queen of Leenane

In a rundown cottage in the mountains of Connemara, lonely Maureen Folan lives a dull, isolated life with her manipulative mother, Mag, until one day an unexpected admirer arrives.  Maureen senses a last chance to escape from her dreary existence, but Mag has other ideas and the two women are plunged into a battle of wills that drives them to a desperate and terrible conclusion.

Martin McDonagh’s play crackles with emotional fire and the blackest of comedy that is both hilarious and horrific.  First performed in 1996 in Galway, it transferred to the Royal Court, London where it was nominated for an Olivier Award, while the Broadway production won 4 Tony Awards.

Martin McDonagh’s writing for the theatre also includes A Skull in Connemara, The Lonesome West, The Cripple of Inishmaan and The Pillowman.  He has also written and directed a number of films, of which the best known is the Academy Award winning Three Billboards Outside of Ebbing, Missouri (2017).

The Beauty Queen of Leenane is produced by the Minack Theatre and directed by Hannah Chissick.

Cast Biographies for the Beauty Queen of Leenane

Theatre
Over a 40 year career Anne has played some challenging roles. Her last performance was as Granny Coleman in the UK premier of THE OMISSION OF THE FAMILY COLEMAN for the Ustinov Royal Theatre in Bath. Prior to that she performed as Blaize in PORTIA COUGHLAN at The Old Red Lion in London, she was nominated best actress in a supporting role in the Off West End Awards. Other favourite roles include Juno in JUNO AND THE PAYCOCK - Newcastle Playhouse; Kay in LITTLE GEM - Olympia Theatre Dublin and tour;  Moya in RED ROSES AND PETROL (Dublin and London) voted best Actress by In Dublin;  Bridget in THE WEDDING - The Belgrade, Coventry; Treas in BRAZEN (a play showcase at the Criterion in London);   Bessie Burgess in THE PLOUGH AND THE STARS  for Second Age; Lisa Marie in WAITING FOR ELVIS - Axis Theatre, Dublin; Carmel in  FROM THESE GREEN HEIGHTS - Axis Theatre;  Sally, aged 92, in FINDERS KEEPERS - Abbey National Theatre; Mama in ‘TOWNLANDS OF BRAZIL - Axis Theatre and Poland; Mother in critically acclaimed one woman show THE MOTHER - The Crypt, Dublin. ; Nurse in ROMEO AND JULIET and   Emilia in OTHELLO - both for Second Age; Mags in AN GIALL - Lyric, Belfast;   Gertie McDowell in DUBLINERS - Mermaid Theatre, Copenhagen;

Film work includes Hotel Amenities (winner of Best Actress, Malaga Film Festival 2013); Shadows in the Wind; This Chair is Not Me; The End of the Nine Till Five; Timelarks and Resurrecting the Streetwalker.

Originally from Cornwall Ben grew up on a small farm before training at the Academy of Live and Recorded Arts (ALRA) graduating in 2013. His theatrical work as an actor started in repertory theatre before moving into regional and national touring theatre, with companies including Miracle Theatre, Quirk Theatre and the Minack.

When not acting on the stage or screen himself he is never far away from the scene be it directing or writing with his company Ha-Hum-Ah Theatre. When he's not doing that he can be found in his small vineyard tending to his vines. 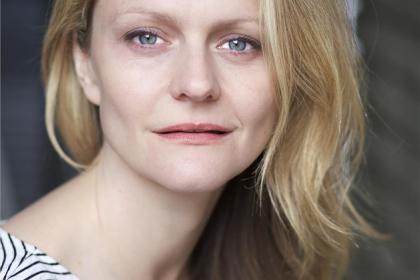 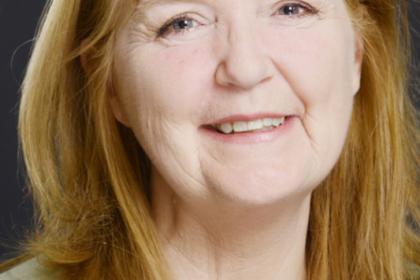 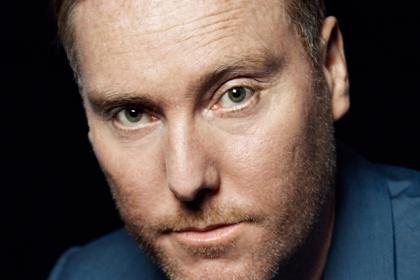 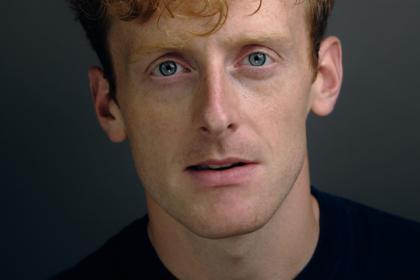 This is a kitchen sink drama  - with a fully fitted kitchen thrown in - where the fate of four Irish lives is inexorably determined, in a beautifully written and observed play that is overwhelmingly powerful, and with a cruel twist.

The Beauty Queen of Leenane, was written by Martin McDonagh, the academy award winning director of the film, Three Billboards Outside of Missouri.

This play was first performed in Galway in 1996 and made a memorable impact at the Royal Court in London and on Broadway.

For Hannah Chissick, the director of this Minack Theatre Production, it is the realisation of a dream to present it herself, having made her name at the open air theatre with another superb Irish drama Stones In His Pockets, two years ago.

Quite apart from the quality of this play and its actors, it is the set that is remarkable - the fully equipped kitchen, from its iron range and flue, cluttered cupboards, oven and hob, boiler, television set, toaster and radio, to a bottle of HP sauce, all set on a platform that partly obscures the Minack's famous seascape.

It works so well, enveloping the players in this intense drama, with all eyes on the lives that are being lived in this claustrophobic kitchen, in a remote cottage in the mountains of Connemara.

Here we find the furious and frustrated Maureen, a 40-year-old who needs the patience of all the saints in Ireland to cope with the endless demands of her manipulative mother, Mag, making her cup after cup of the complete meal-in-a-cup, Complan - remember that?

The alternative is porridge, which she prepares on the hob, but otherwise there is not much more to life with Mag, other than a frightening and fierce war of bickering words, and many, many regrets.

Two men will enter this domestic nightmare, Patrick, known as Pato, who may, just, offer a way out, and the gauche and fidgety track-suited Ray, who may, just, unwittingly close that window of opportunity.

Maureen transforms from drudge to super glamorous by shedding her baggy jeans for a skimpy black number, Mag, wearing slippers and woolly socks, hugs both the glowing range and dark family secrets, and Pato is heartbreaking as he simply puts into words his horrible experiences as a brickie across the water in England, and his hopes for a better life in America.

As for Ray, what can you say, Cornwall's own Ben Kernow grasps the role with relish, raising laughs amid the anguish. It could have been written for him.

No Irish eyes were smiling at the end of this raw drama, but it was an experience. 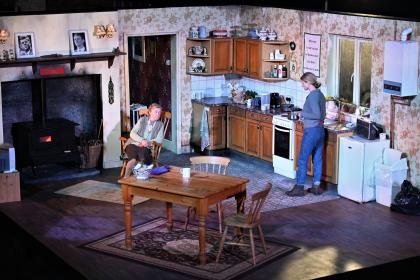 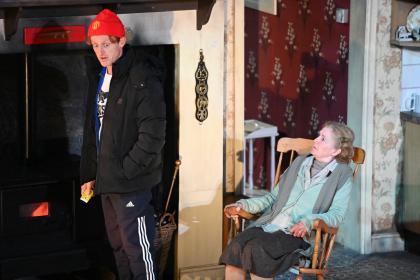 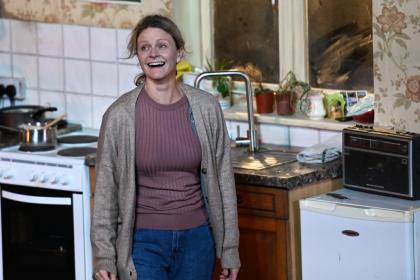 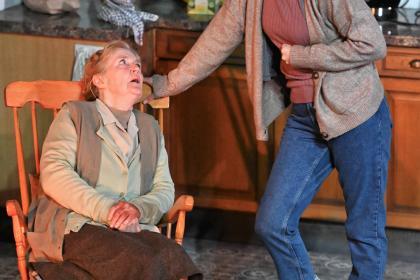 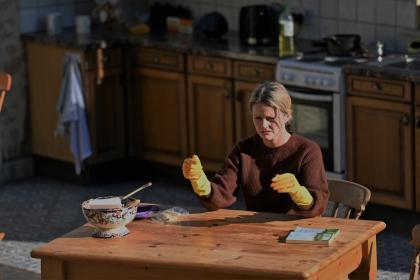 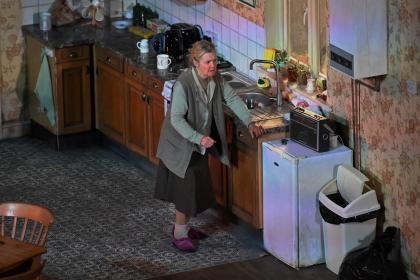 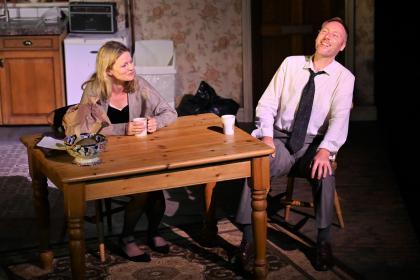 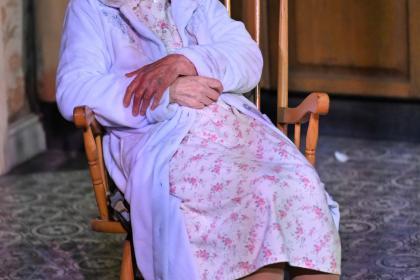 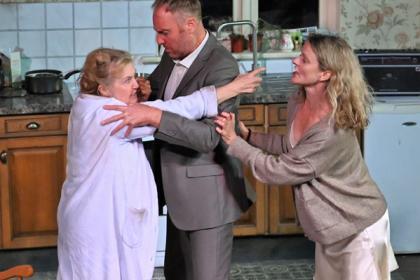 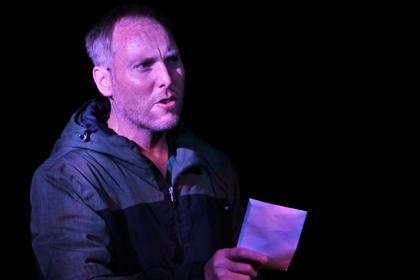 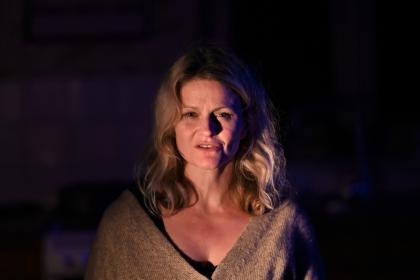 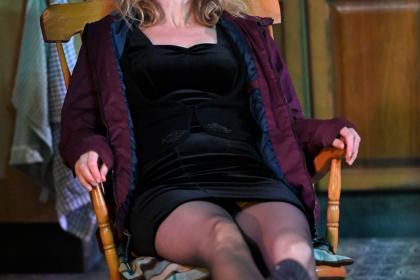 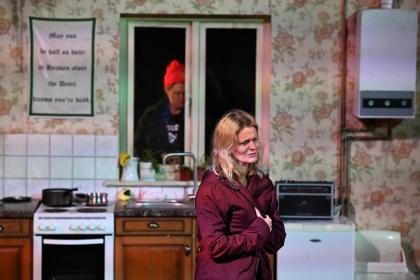