This is Chaucer… but not as you’ve ever seen it. Revered as one of the most important works in English literature, ‘The Canterbury Tales’ paints an ironic and critical portrait of English society in the Middle Ages.

All of life is here in these few bawdy, funny, serious and sometimes shocking, short stories. Experience a journey down the foul and fetid footpaths of fourteenth-century England, told with David Mynne’s usual irreverence, wit and silliness!

In this one-man performance, there will be medieval naughtiness and nonsense! There may be tights and a codpiece! There will, no doubt, be some fourteenth century swearing! Let’s party like it’s 1387!

David is a founder member of Kneehigh and worked with the company - as a performer, maker and graphic designer - on and off until 'retiring' in 2012 after an extensive international tour of 'The Red Shoes'. He returned to Kneehigh in 2017/18 to tour 'FUP', playing a centenarian Cornish reprobate!

In 2013 David created his first solo show; Charles Dickens' 'Great Expectations'. Working with director Simon Harvey (o-region/Kneehigh) they developed an original style of story-telling that is exciting, accessible and easy to tour. Since then they have written and created, together, three further one-man shows: Bram Stoker's 'Dracula!', Homer's 'The Odyssey' and Charles Dickens' 'A Christmas Carol'.

David tours his work nationally and internationally, with 'Great Expectations' and 'A Christmas Carol' having successful runs in Los Angeles. His work is adaptable to fit most spaces: he performs in village halls, churches, barns, pubs, cellars, fields, gardens, parks etc., as well as traditional theatres and arts centres.

Last year he was working with Simon on a new show', but less than two weeks before it was due to open the country went into lockdown and 'The Canterbury Tales' never got told. When lockdown was lifted and theatres began to slowly open again he was approached by the Minack with the idea of performing one of his shows. The rules had changed and social distancing was necessary, so a one-man show was an ideal choice. 'Great Expectations' was rehearsed and a successful week of shows followed. David performed at the Minack again, in late December, with 'A Christmas Carol' being watched by brave audiences wrapped up in the face of the Cornish winter weather!

There were tales of the unexpected when Penzance actor David Mynne presented a programme of flying Chaucer  - his joke, not mine  -  at the Minack this week.

He began his one-man show with a welcoming prologue in Middle English, so there was a collective sigh of relief when he reverted to telling his tales of yesteryear, that is the 14th century, in the language of today, "and gladly wolde he lerne, and gladly teche".

David was a founder of the now legendary Kneehigh Theatre in West Cornwall, performing and designing and touring shows around the world, and is now creating solo appearances, working with director Simon Harvey, on memorable characterisations.

It is a formula that is perfect for these spaced-out times, and he was quick off the pandemic mark last year, ready to perform Dicken's Great Expectations and A Christmas Carol at the Minack in record time.

The research and clever witty scripts, his stage presence, and range of remarkable voiced sound-effects have won him many fans who are more than ready to be entertained after so long in lockdown.

His take on Chaucer's often bawdy, satirical view of society in the Middle Ages, is very much a 21st century interpretation, relying on base humour, but is faithful to the names and some of the 28 stories that were told in verse and prose, by a group of pilgrims making their way from London to Canterbury.

They competed to be the best, but Chaucer died in 1400, before he could nominate the winner.

Today, The Wife of Bath, a woman very much ahead of her time, who called a spade a spade, so to speak, is the most naughtily notorious, along with tales of The Miller and The Knight. They are irreverent, uncouth, silly, ironic, risque and frisky, slightly shocking, and not short on innuendo.

David tells his tales via Harry, the landlord of the Canterbury Arms, whose 'house special' might be deep fried slug  -  or a pebble to suck on.

He moves on to the jiggling Alyson of The Miller's Tale, and Absolon, who makes a mistaken approach, to deals with the Devil, to Simpkin of The Reeve's Tale, and Aurelius of The Franklin's Tale, with Trouble At T'Mill.

The triplets, Thomas, Richard and Harry are represented by three pewter pots, as David has his fun with sound effects, also involving Baby Stephen in his cradle and galloping horses.

This is coarser Chaucer and it pleased the crowd. 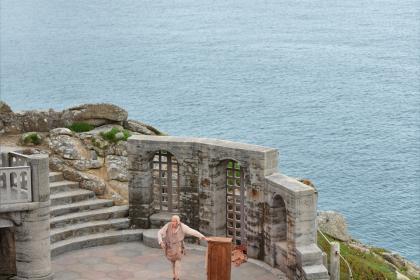 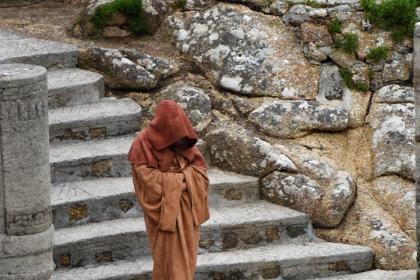 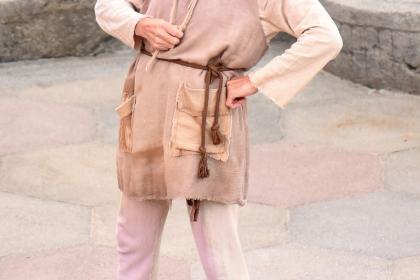 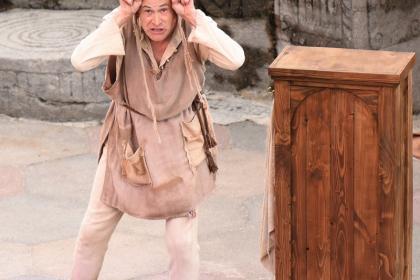 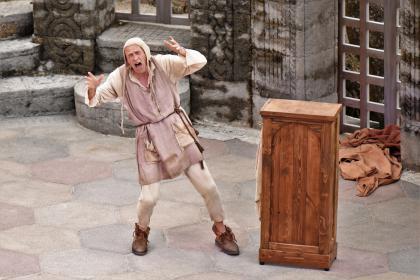 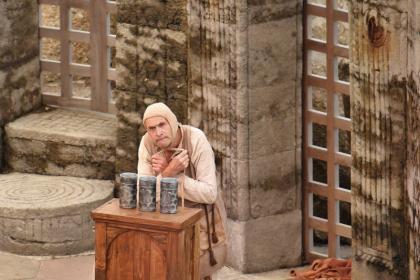 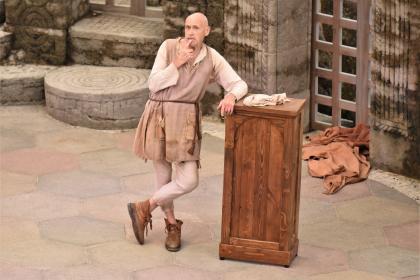 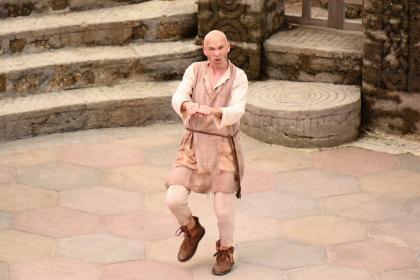 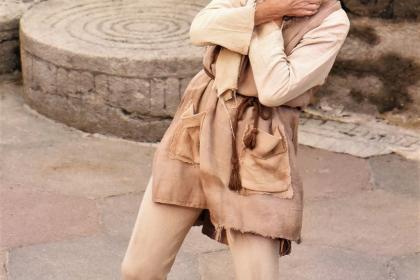 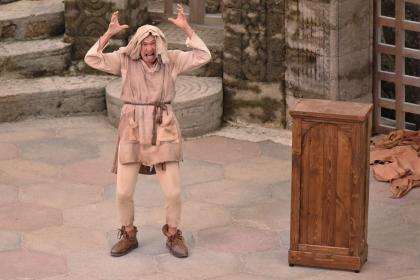 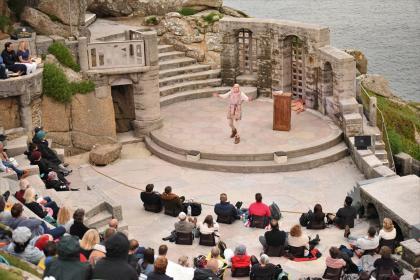