After the successful Twisted Tales Vol.1&2 and Twisted Tales Outdoors, ‘Owdyado Theatre are excited to present their first seasonal show - Twisted Christmas. Featuring writers from Cornwall and across the UK, this selection of original dramas includes tales of how to buy the perfect gift for your unloved ones, the dark side of Christmas cracker jokes, and one woman’s maniacal plot to murder Santa Claus.

Influenced by cult classics such as Inside No.9, The Twilight Zone and Roald Dahl’s Tales of the Unexpected, Twisted Christmas promises a darkly comic afternoon of macabre mini plays all with a festive flavour!

"LOVED IT, managed to make me laugh until my face hurt"

"One of the most visually pleasing, exciting, funny pieces of theatre I've seen. I spent a lot of time laughing or sitting on the edge of my seat. Go watch it if you can!"

“Beg, borrow or steal to get yourself a seat for this, it’s utterly delicious...Great cast, dark as hell, and brilliantly funny. Winner”.

“Blindingly great night of twisted tales...such a fabulous and entertaining evening, I never see them coming!!!”

We were warned  -  this is a Christmas special, with a twist, where everyone is plotting to behave outrageously, even murderously, over the festive period . . .  so no change there then. What's more, it is very, very funny.

This was a first at the Minack for the tiny Cornwall-based touring theatre company, named Owdyado - as in a greeting - except that everyone down here says "you all right then" rather than shaking hands and asking "owdyado".

They have made their curious name throughout the Duchy with a series of Twisted Tales, and have now devised a seasonal show, with a very darkly humourous, very adult slant on the family fun that lies ahead.

It has been a remarkable and very different year for the open air theatre that has taken a deep breath of fresh West Penwith air, and boldly booked the many, mainly local actors and musicians that are struggling to survive the Covid pandemic that has drastically restricted their opportunities to perform.

Thus we found ourselves sitting in the auditorium that had been closed for two days beforehand, due to storm force winds, awaiting an hour's worth of irreverantly festive mini skits, as dusk descended on a mercifully fair, but non-too-warm December afternoon.

A Christmas tree twinkled beguilingly on the stage, as Charlotte Bister and Connie Crosby enacted the series of tinsel-trimmed plots involving, revenge, murder, and death by corkscrew - and we were alerted to the presence of "a big man wearing a red suit, seen creeping into all our houses".

Mmmm.it's all pretty dark, but also too funny for words, and the show does feature several distractions, including speculation over the contents of Santa's sack, a farce involving burned mincepies and a smashed parcel of presents, oh, and death, actually.

And there were some cracker jokes, one involving Scrooge scoring a match winning goal, thanks to the ball the Ghost of Christmas passed. Ha Ha.

How we all need to have a good laugh during these Omicron threatening times  -  thank you Owdyado, God Bless You, Every One.

Speaking of which, David Mynne is due to present his accaimed one man show,  A Christmas Carol by Charles Dickens, during the school holidays. Check the Minack website for details and updates. 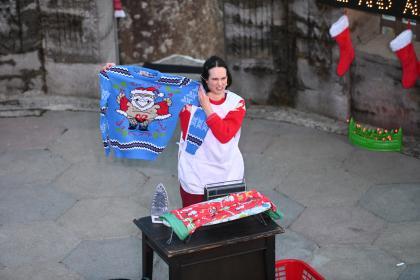 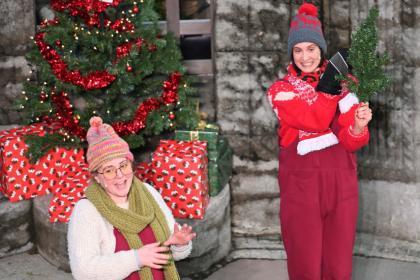 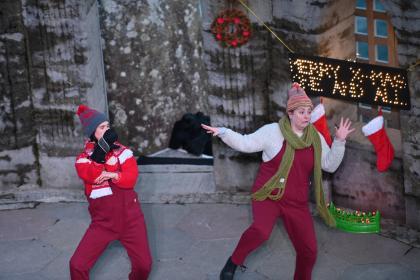 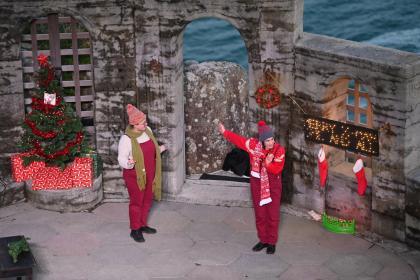 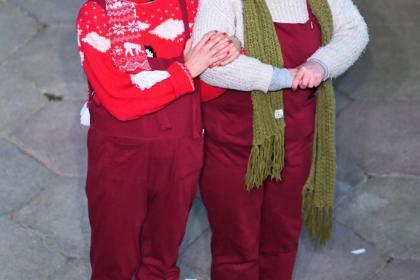 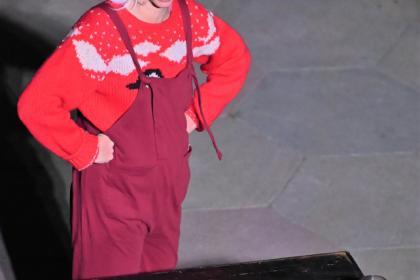 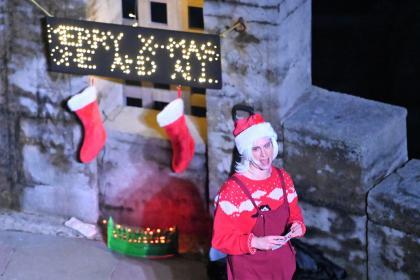 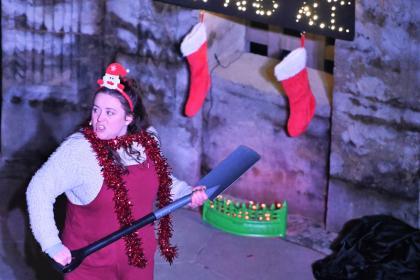