Tickets for this performance are sold on behalf of Theatre Royal Bath Productions.

In 1910, the then unknown  Charlie Chaplin and Stan Laurel set sail from Liverpool to New York as part of Fred Karno’s famous music hall troupe. On the voyage, they shared a cabin, they shared comedy routines and they shared laughter...

Inspired by real life events, Told by an Idiot’s acclaimed production of Charlie and Stan is the remarkable story of the greatest double act that nearly was and is a hilarious and deeply moving homage to two men who changed the world of comedy forever.

Told by an Idiot have garnered critical acclaim and devoted audiences worldwide for their wonderfully theatrical shows.

Originally produced by Told by an Idiot and Theatre Royal Plymouth, in association with Royal & Derngate Northampton and Unity Theatre Liverpool

Two of the most famous comic slapstick pairings in the history of entertainment might have been very different if Charlie Chaplin and Stan Laurel hadn't fallen out with one another when they sailed on a steamship to stardom across the Atlantic.

Chaplin and Buster Keaton and Laurel and Oliver Hardy later became the most famous comedy duos of the early 20th century, still remembered today for their silent movie knockabout routines and crazy chases, with custard pies thrown in, at the first opportunity.

This take on a 'what might have been, but never was' collaboration between two of those famous names is very much a 21st century interpretation - sophisticated, carefully choreographed and with an unexpected charm created by the watchful Sara Alexander playing a jazzy score on an upright piano.

The original music written by Zoe Rahman to accompany the largely silent action, gives the acrobatic actors time to stage their moves with the grace of Olympic gymnasts.

The tall, rangy frame of Jerone Marsh-Reid as Stan, who chases and clambers around a set that looks too small for his long arms and legs, especially when he is being impossibly squashed into a sea chest, has been trained quite beautifully into controlled moves contrived by former Belgian clown Jos Houben, the show's physical comedy consultant, in partnership with choreographer Nuna Sandy.

Not to be outdone, Danielle Bird, petite and ever-expressive, makes her stage entrance as Chaplin via the tiniest suitcase imaginable, also thanks to an era-perfect set design by Ioana Curelea, based on the steamer that set sail from Liverpool, bound for New York in 1910.

The play, written and directed by Paul Hunter for Told By An Idiot and the Theatre Royal, Bath, based on an idea by Irene Cotton, had its Press launch on a national tour at the Minack, thanks to a link made during lockdown, between executive director Zoe Curnow and top producer David Pugh, who brought the season's headline-making Educating Rita to the West last summer.

Charlie and Stan was inspired by a little-known fact that Chaplin and Laurel met during the voyage to the US, when both were starting out on their comedy careers with the already famous Fred Karno's music hall troupe.

That is indeed fascinating, but this 'true fantasy' tells us little more about that chance meeting that possibly came about when they shared a cramped cabin. Whether they fell out over who was going to sleep on the top bunk, is not clear.

At any rate, the story tells of their shipboard capers, dreams, early and later lives, Laurel's first encounter with Hardy on a golf links in California in 1927, and an imagined reunion, or not, in Beverley Hills in 1961, when Chaplin was really famous, and they joyfully reprised their tap-dancing routine of old.

Nick Haverson is brilliant as a multi-role manic drummer, the Fred Karno who flung a fistful of dollars overboard, and tried to catch them in a lifebuoy, and as a starchy butler to Chaplin.

Lest we forget, pianist Sara laughingly squirted hand sanitiser, before a note was played on her keyboard, as model squawking 'seagulls' set the scene for the story of the greatest double act that never was, seen at last by a much bigger, not so socially distanced audience, which means more tickets are now on sale for the rest of the season  -  hoorah! 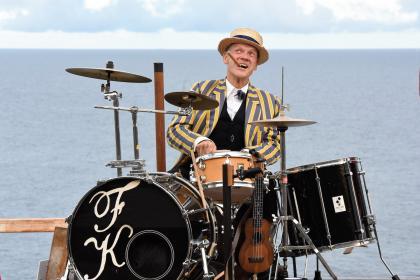 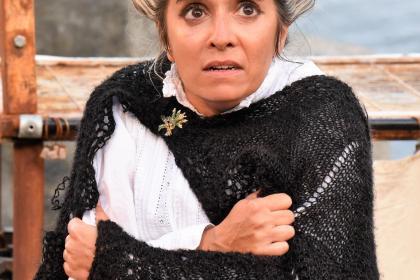 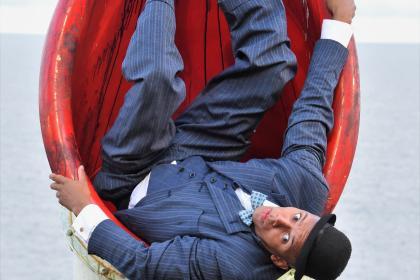