This May, ‘Show of Hands’ are returning with a special Spring preview at one of the most iconic and atmospheric venues on the touring circuit.

In the granite, clifftop amphitheatre of Cornwall’s Minack Theatre, the duo will present specially arranged, stripped back or reworked versions of many of the band's classic tracks such as ‘Country Life’, ‘Crow on the Cradle’ and ‘The Blue Cockade’.

Steve and Phil will also feature material from the critically acclaimed album ’Battlefield Dancefloor’ as well as the famous ‘Duos’ opening set.

'One of the most cohesive, diverse and persuasive sets of their entire career'

'The combination of the four of you was absolutely brilliant, loved every moment'

'What an amazing group'

'What a performance - best yet!'

'Loved the set, and the sound was awesome, was able to hear all the instruments and voices clearly. Didn’t want it to end. The four of you together are the absolute perfect mix'

‘This is a brilliant album and you'll buy it, you know you will’ - RnR

Something special happened at the Minack at the weekend  -  we were given a shot in the arm to match the best vaccine when electric folk band Show of Hands debuted their new single   -  and it really should be the No1 hit of the summer.

Twenty-odd years ago, Steve Knightley wrote Cousin Jack, a song that is sung in every school in the Duchy, and has become the new Cornish anthem. Now, in partnership with Phil Beer, a composer and musician to his fingertips, he has written another winner called Green Fields.

It is a song full of pure optimism, a roadmap to a summer music festival landscape, with a chorus of  "let's go" as the pair set out at dawn to drive to "a perfect place we all can meet and let the music flow" -  and we can all do with some of that.

Knightley joked that it was his new "pension pot song" and will be officially launched on June 21, the much-anticipated date when we fully emerge from pandemic lockdown.

The sellout Minack audience gave Green Fields a whooping thumbs-up - and there's no doubt, it should be a chart topper.

The duo that has filled the Royal Albert Hall with fans, and been filmed playing at Glastonbury, set us buzzing with their upbeat "feeling that this year is going to be the best one yet" as they hit the ground running, with matinee and evening sets full of outstandingly good music.

The Devonians met on the folk circuit close to half a century ago, toured with the legendary Ralph McTell,  played session gigs for Mick Jagger, and have recorded 30 albums, winning awards for their song-writing and composing flair that is full of social commentary.

They have bashed the City bankers with Arrogance, Ignorance and Greed, written the folk opera Tall Ships, celebrated the South West Coast Path jubilee with The Path and paused to consider rural poverty with Country Life, the floating gaol that was The Bristol Slaver, and won fame via Cousin Jack, the name given to Cornish miners that exiled themselves to find work across the globe.

Show of Hands has played at the open air cliff theatre many times, but this was their first outing in a year, and Knightley exclaimed "I can't get over this" as Beer muttered "feels like there are a lot of people in our house".

They opened with It's All Your Fault, presumably aimed at the pandemic lockdown, and played guitars, fiddle and mandolin to new 'folked up' arrangements of many old songs including the so-familiar How Can A Poor Man Stand Such Times and Live, and The Boys of Summer with nobody on that beach, by The Eagles.

And as for Green Fields . . . you heard it here first!

They were superb  -  so don't tell us you're not coming back, Cousin Jack. 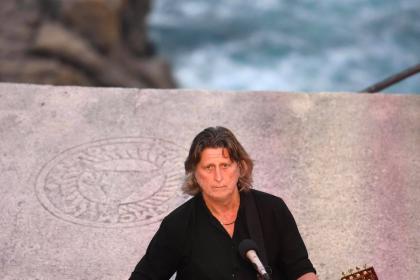 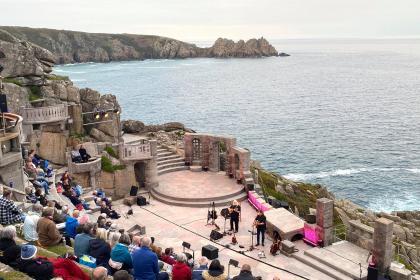 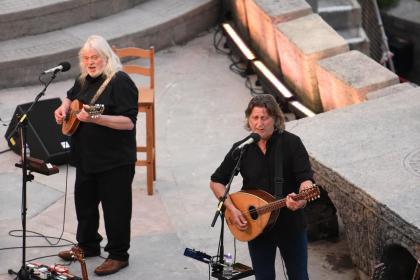 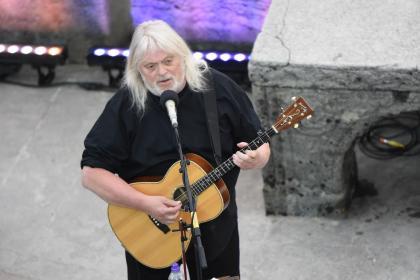