The Cameraman - he’s got you framed!

From ‘sometime in the future’, a jaded detective looks back on his early career as a young crime-fighter in the ‘Roaring 20s’ - the days of fake news, a world pandemic and global warming.

Set around a seedy French cafe, this is a playful homage to the film-noir genre. There’s a voice-over narration and live musical accompaniment, including guitar, piano and accordion.

There is topical intrigue, mistaken identities and silent comedy as the storyline follows the fortunes of an inept cameraman who inadvertently becomes involved in an international robbery.

With influences as diverse as Tintin, Roger Rabbit, Humphrey Bogart and Buster Keaton, The Cameraman offers a comic view on the digital age with more than a touch of nostalgia for our analogue past.

The multi-talented members of the Bash Street Theatre spent the latest Lockdown creating a completely new show to add to their crazy, zany film-strip based repertoire to celebrate their 30th touring season.

And they made a big splash on Sunday when they presented the 'world' premiere of The Cameraman, with a colourful set surrounding the seedy Cafe du Pont in Paris.

This independent company was founded by partners Simon Pullum and JoJo Pickering in Penzance, long before their son Lochlann Pickering and niece Kesha Pullum, were born.

Today they are all very much part of the performing and creative team that has progressed from its silent movie inspirations, featuring circus skills, to a musical comedy adventure full of sound.

The group has won awards and put on one of the best productions of the summer, The Strongman, at the Minack last year.

At the heart of this new work is Julian Gaskell, who could have done with more than one pair of hands as he narrates and voices their lines, while playing songs on keyboard, guitar and accordion, and adding loads of sound effects  - including more than one enormous splash, as the characters take involuntary dives off le pont.

It is a truly remarkable performance AND he composed the score  -  so, no wonder artistic designer Isolde Pullman, yes another member of the family, named a set street after him  - Rue Gaskell.

The story is based on a cameraman, played by Simon, who aims at everything, including the audience, and somehow gets mixed up with the theft of the world's biggest diamond, worth "five hundred million and six francs".

It somehow falls into the hands of a crooked chief cop, also played by Simon who has his work cut out making quick costume changes from snapper suit to gangster-striped outfit.

The detective in hot pursuit is Lochlann, who is sometimes aided and abetted by cafe chanteuse, Fifi, played by Kesha, who, when not juggling flaming flambe dishes, bar chairs and tables, manages to avoid the inevitable banana skin during an equally inevitable chase.

It is lovely inventive fun and will be toured around the south west this summer. 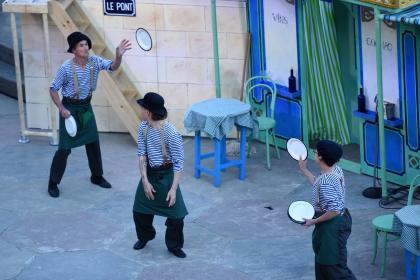 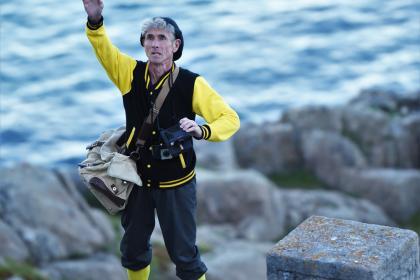 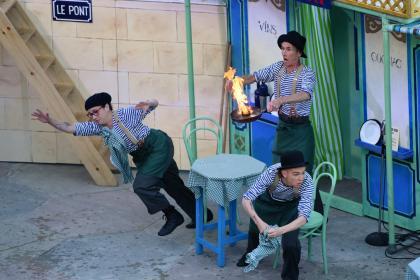 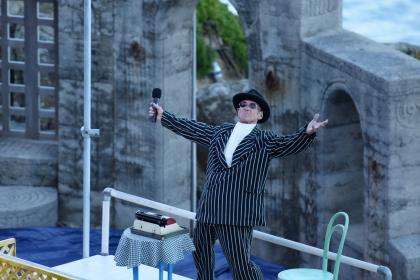 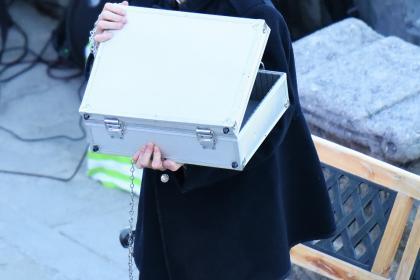 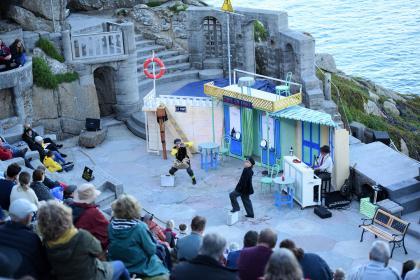 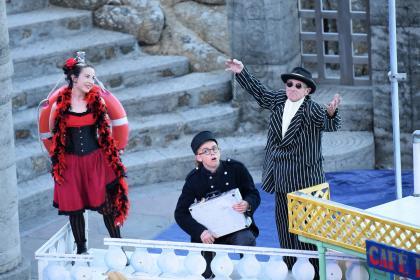 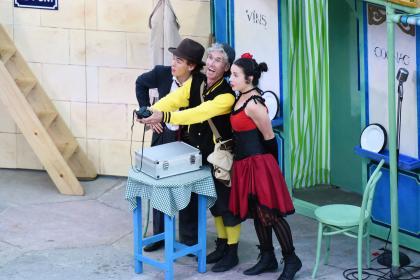 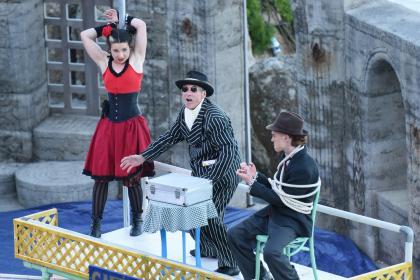 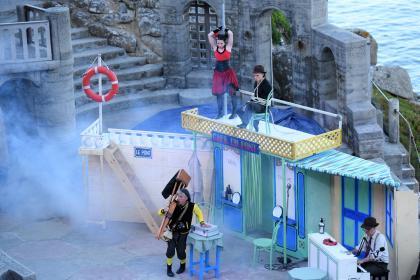 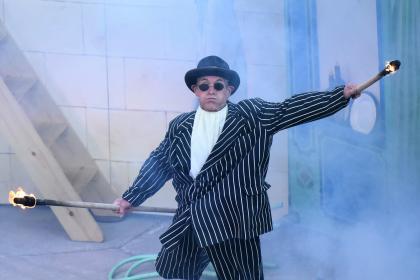 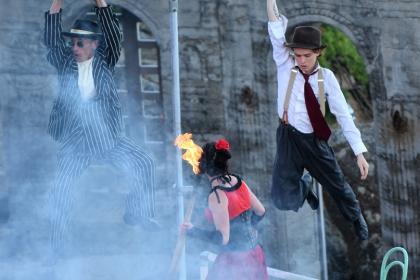 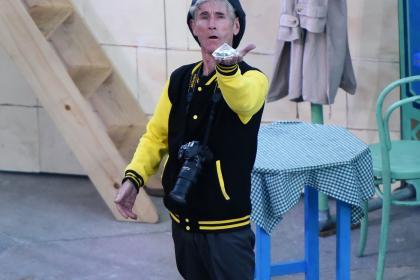 Bash Street is a small independent company run by partners, Simon Pullum and JoJo Pickering, who founded the company 30 years ago.

Based in Penzance, Cornwall, England, the company has built an international reputation for silent-comedy, musical, street theatre shows.

Since our first performance, in Morlaix, France
in 1991, we have created over 20 different productions and toured to major festivals throughout the UK and Europe, as well as in Israel, Egypt, Turkey, China, Hong Kong, Japan and South Korea.

Simon Pullum trained as a journalist before joining Cornwall Theatre Company in 1982, performing and touring throughout the UK. In 1986 he co-founded Jo’s Jungle Band, street theatre group, developing musical and circus skills.

Since founding Bash Street Theatre with JoJo Pickering in 1991, Simon has written, co-produced and performed in 20 different Bash Street shows at festivals throughout the UK, Europe, and the Far East. His skills include tightrope walking, unicycling, juggling, and stilt walking.

Kesha is the founder of Disparu Theatre, a street theatre company based in Redruth, performing as an acrobat, stiltwalker and unicyclist.  The Strongman is her fourth show with Bash Street Theatre, having also performed in Bellevue Hotel, CLIFFHANGER! and as a stiltwalker in The Creatures.

Singer, songwriter and multi instrumentalist, Julian has toured the UK and Europe with his band ‘Julian Gaskell and his Ragged Trousered Philanthropists’. This is Julian’s fourth show with Bash Street Theatre.

He first joined us in 2009 as composer and pianist for The Lion Tamer, a village hall touring show. He then toured with the company for several years, playing the accordion for The Station and also piano for CLIFFHANGER!

Lochlann first started performing with the company as a stiltwalker in The Creatures, then as a magician in The Last Illusion and more recently as our musician in The Lion Tamer and CLIFFHANGER!

Lochlann spent a year studying Performing Arts at Circomedia in Bristol and later studied Music at Truro College in Cornwall.  Recently he has been touring with the company as piano player in both The Strongman and Bellevue Hotel.