This year the Cambridge Gilbert and Sullivan Society is bringing H.M.S Pinafore, or The Lass that Loved a Sailor, to the Minack! One of Gilbert and Sullivan's slickest and most popular comic operettas, with some unforgettable tunes, colourful characters and a timeless mockery of social class and patriotism, H.M.S Pinafore is the perfect way to dive back into theatre this summer.

Despite the beautiful Minack scenery, all is not ship-shape on the HMS Pinafore...

Josephine, the captain's daughter, is set to marry the eccentric Sir Joseph Porter, First Lord of the Admiralty, but she is deeply in love with Ralph Rackstraw, a lowly sailor. With the help of Ralph's fellow sailors and Sir Joseph's sisters, cousins, and aunts, the couple plan to elope, but can love conquer the barriers of wealth and class?

This show contains various stereotypes which reflect prevalent societal prejudice at the time it was written.

The operettas written by two Victorian gentlemen, W.S. Gilbert and Sir Arthur Sullivan, are overwhelmingly anachronistic by today's standards, so it is a wise director who taps into our sense of tradition and and silliness, refusing to take the content too seriously.

Rob Nicholas and the splendid cast and musicians of the Cambridge University Gilbert and Sullivan Society achieved just that on the grand poop deck of the paradoxically named HMS Pinafore, poking fun at its absurd characters at every opportunity.

Zachary Green relished his starring role as the doddery First Lord of the Admiralty, winning-over his enthusiastic first night audience, despite the considerable distraction of a tangerine-lemon full moon that rose majestically over the sea, from a clear horizon.

Soprano Sophie Ellis was superbly sure-footed and elegant in a Delft blue gown, playing the Captain's daughter alongside the smart and sweet tenor of her lovely sailor Seb Blount, despite the attempts of the desperado Dead-Eye, Jonathan Whiting, to part them.

The scheming Hebe, Rosie McLeish was backed by a lively chorus of sisters, cousins and aunts,and aye-aye sailors, who proved to be as good at catching tossed champagne flutes, as splicing the main brace, or whatever.

From the off, musical director Eleanor Medcalf and her orchestra kept everyone on their toes, with frills and dancing circles by choreographer Ella Palmer, costumes by Ella Lowden, lighting by Ella Fitt and sound by Kit Treadwell and Will Audis.

The impressive set was a triumph in the creative hands of Jonathan Powell, Anna Piper-Thompson and carpenter Jeremy Zolnai-Lucas, using a palette based on naval signalling flags, with 'firing' cannon, all overseen by production manager Sam Porter-Frakes, technical director Matthew Latham, with producer Anastasia Joyce.

We Sail The Ocean Blue on a tide of patriotism from a past era - let's all do it together  - for posterity. 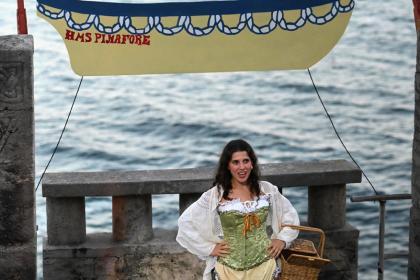 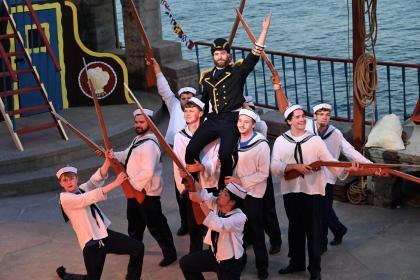 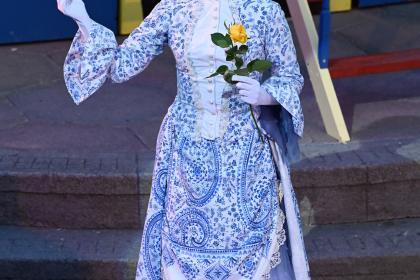 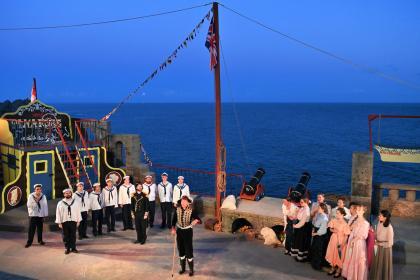 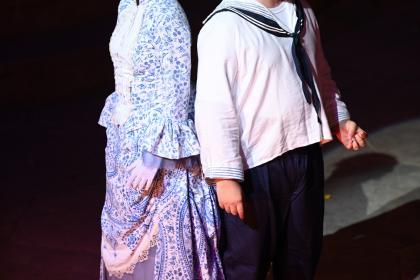 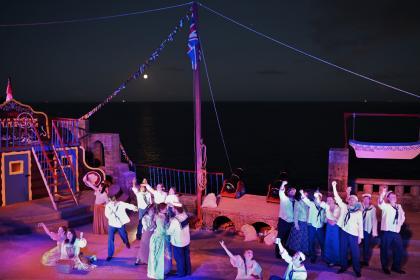 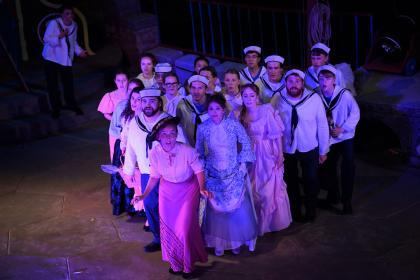 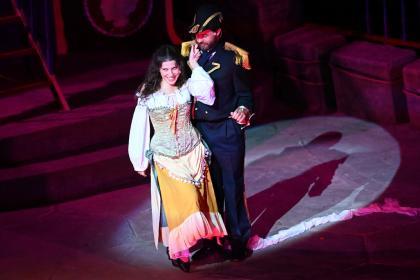 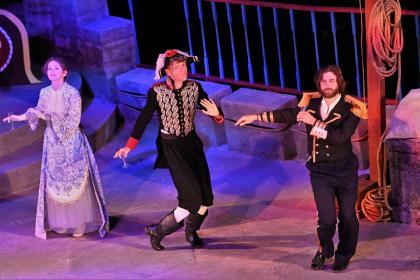 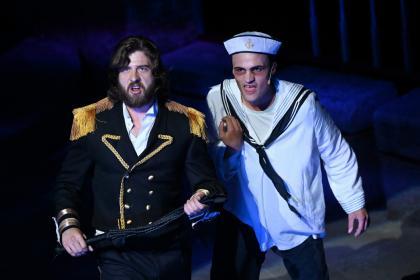 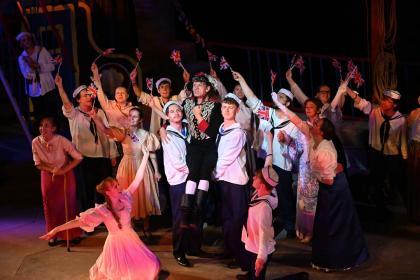 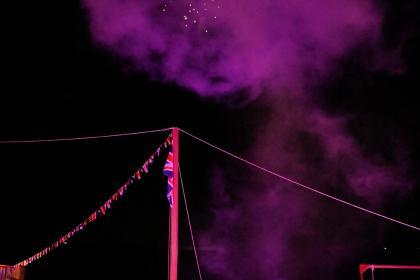