And Then Come the Nightjars

And Then Come the Nightjars

It’s a dark night in 2001.  Farmer, Michael, and local vet, Jeffrey, are huddled in the cow shed playing general knowledge games as they await the birth of a calf to join his herd.  Outside the warm lamplight of the barn, the terrible shadow of Foot and Mouth disease is growing darker but Michael and Jeffrey both have troubles nearer to home.

Bea Robert’s compassionate portrait of country life is about more than an unstoppable epidemic.    She traces the profound changes in society overtaking rural communities as Michael and Jeffrey face a new world of Grand Designs, Tesco Metros and rural tourism.

Leavened with gentle humour, this award-winning play is a both a requiem for a vanishing world and a hymn to the survival of friendship even when everything else falls apart.

This play contains language and comments that you may find offensive.  These reflect the era and characters portrayed and are necessary to the play.

Performed by Steve Jacobs (Miracle, Wildworks) and Craig Johnson (Kneehigh, Squashbox) and directed by John Brolly (Associate Director, the Minack Theatre), this is a Minack Production.

The pain of a pandemic that claims millions of lives is at the centre of the first play of the season at the Minack  -  but it is not dealing with today's desperation, anger and recriminations  -  it happened 20 years ago, and the victims were animals.

This award winning play, written by Bea Roberts, begins in 2001, when Foot and Mouth spread frighteningly rapidly across England and Scotland, infecting herds of cattle on thousands of farms.

More than six million animals were slaughtered as a result, devastating rural communities, and ruining the livelihoods and mental health of many farmers, for ever.

This moving play mirrors today's Covid pandemic and the unprecedented impact on people's lives in so many ways, but the pain is softened by the humanity and humour of two men with diametric personalities, who somehow share their sorrows.

The story begins as vintage farmer, Michael, and vet Jeffrey sit on straw bales in a barn in Devon, awaiting the birth of a calf to Dottie, speculating on the latest name in a long list of Royals, that this one will be given  -  Victoria, perhaps.

It is a moment to savour, the two men joshing during the long labour, the scene little-changed over centuries, but disaster is waiting to strike, and all-too-soon the stage will be engulfed with smoke from the slaughter that will inevitably come.

The role of Michael might have been written for Steve Jacobs, a brilliant stage, screen and television actor, who came to live in Cornwall via a tour with the Royal Shakespeare Company before joining Miracle, Wildworks and Kneehigh, and starring in many Minack productions.

The recently widowed Michael doesn't suffer anything or anyone gladly, let alone fools. His views are loud and uncensored, the curses come in volleys, but for all that, he is kind and devoted to the 'girls' in his herd  -  taking a break from the script on Monday, to swear at the din of a low flying passing helicopter, probably checking for G7 assassins?

Craig Johnson, more usually seen playing the puppeteer and music with his Squashbox Theatre, is another Minack favourite, especially with the little ones, but here he takes on the challenging role as the vet, pragmatic, professional, with a disintegrating family.

The two opposites attract in a remarkable way in this finely written and observed episode in their lives, that must parallel the experiences of so many people today.

Dominic Cummings might be busy with the blame game this very week, but it was the same 20 years ago, when unprecedented events resulted in the slaughter of so many animals, raising questions over government policy.

The experienced John Brolly directs and Ben Sutcliffe punctuates the scenes with music that speaks of grief. Simon Hutchings is production manager and lighting designer. Millie Brolly and Connie Crosby smoothly adjust the simple set designed by Marion Harrison. There was a sweet moment on the opening night, when an 'injured' bird was given a tender stroke, as the scene changed.

Speaking of birds, the Nightjar in the title is not welcome in farming circles. Rural mythology has it that it steals the milk from cattle during darkness  -  lives can be ruined in plain sight too. 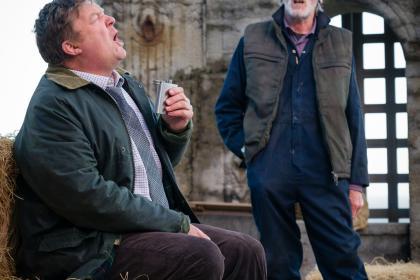 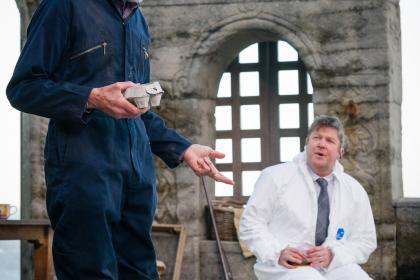 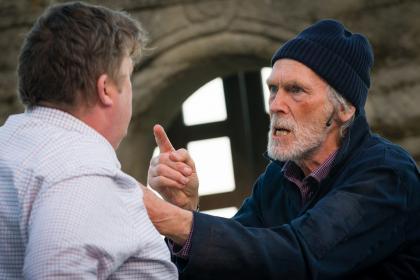 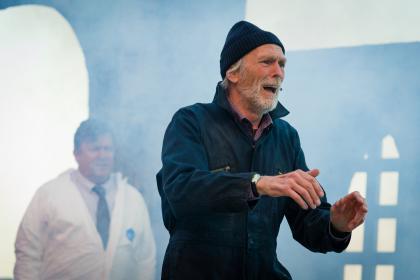 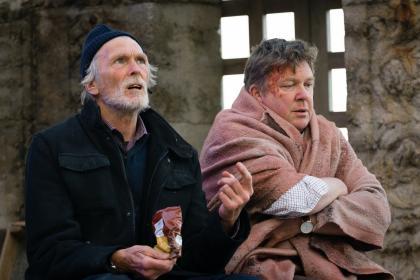 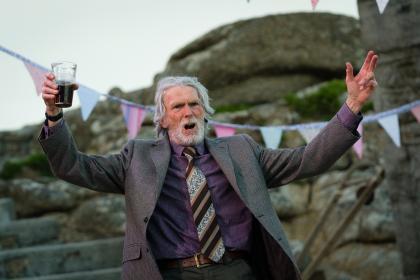 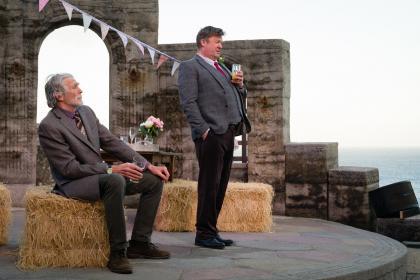 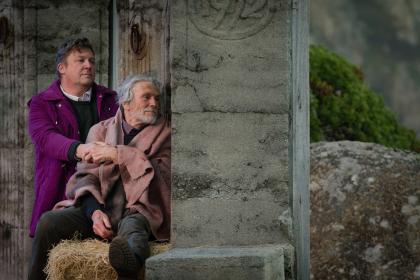 John has been Associate Director to The Minack since 2016 and has directed several highly acclaimed productions including Goodnight Mr Tom, The Railway Children, The Secret Garden and The Lighthouse Keeper's Lunch. He also leads the Minack's extensive programme of community and education work.

As a performer he featured on The Minack stage in 2020 in The Soldier's Tale and he tours with his own unique brand of one man shows with his Umbrella Arts Theatre Company.

He is also well known as a storyteller and performs at festivals schools and events across the country.

Steve has been based in Cornwall for many years after beginning his career in London. He says worked on many inspiring productions with great companies, including Souterrain, The Passion, 100, Unearthed and Wolf Child (Wildworks); Waiting for Godot and Sherlock Holmes, (Miracle Theatre); Hamlet (Cube) and Very Old Man with Enormous Wings (Kneehigh).

Other highlights include a season with the RSC, touring Brazil with the physical theatre company Duddendance, two stints in the West End in The School for Scandal and running away to Wales with NoFit State in their Circus/Theatre extravaganza, Immortal. TV/Film credits include Poldark, Tin, Wycliffe, Doc Martin, Wild West, Hard Cracked the Wind and The Tape.

He played Tom in the Minack production of  Goodnight, Mr Tom and is excited about getting back on stage with them in And Then Come the NightJars.

Craig is an actor, puppeteer and musician living in Penzance, Cornwall.

Since 1999, he has been a member of Cornwall's renowned Kneehigh Theatre, performing in major national and international tours such as ‘Tristan & Yseult’, ‘Cymbeline’, ‘Don John’, ‘A Matter Of Life And Death’ and ‘The Bacchae’, as well as small-scale village hall shows, including directing and acting in ‘Journey To The Centre Of The Earth’.

Craig has also appeared in ‘Alaska’ (Blackfish Theatre), ‘One Darke Night’ (o-region), and several Minack Theatre Company productions including ‘The Lighthouse Keeper’s Lunch’, ‘The Railway Children’ and ‘The Secret Garden’. He has also created and directed several theatre performances for The Eden Project, Cornwall.

Marion has worked in the theatre industry for almost twenty years - since graduating from Leeds University in 2001 with a BA Hons in Theatre Design & Technology. After spending many years as a Touring Wardrobe Manager for companies such as the R.S.C, National Theatre, Headlong and The National Theatre of Scotland, Marion settled in Cornwall and has moved into the role of designer.

Marion has been involved with many projects and productions across the county, designing and producing costumes for The Man Engine (Golden Tree Productions), Orfeo and Hetty Feather for The Minack Theatre, A Dickensian Christmas and Loveplay (A Minack co-production for Ha-Hum-Ah Theatre) and a variety of sets and costumes for the Eden Project, including Room on the Broom, Mrs Christmas, Chocolate Unwrapped, Festival of Food and The Green Fingers Festival.

Marion is excited to be returning to the Minack for this production of And Then Come the Nightjars.