The ghosts of Paul Simon, Tim Buckley, Nick Drake and John Martyn loom large on a collection that ranks alongside work by some of the world’s great singer-songwriters. On his sixth record, Matthews has created songs that are breathtaking in their beauty and audacious in their simplicity

The richness in Matthews’ new work comes from subtle playing and mellifluous melodies. He has improved again. He has become a master of his craft; a man who can play like Bert Jansch, sing like an angel and write songs that Joni Mitchell might admire.

What a difference a day makes! Singer-songwriter Scott Matthews was blown away by storm force gales when he arrived at the Minack for the first of two performances featuring his fresh off the press new album  - but 24 hours later, comparative stillness returned.

The calm matched his unhurried style, as he strummed through the chords of a collection of acoustic and electric guitars, teasing out the elusive tuning that reacted to the fast-dropping clear-sky temperatures.

He brought his 'Starsky and Hutch' cardie for warmth, but it lay untouched on the stone stage, as he desperately made a plea for warming brandy from the sellout audience, rubbing his stiffening fingers together under a cold bright moon.

The 45-year-old singer from Wolverhampton, who has toured with big-name groups, Foo Fighters and Snow Patrol, and has played alongside Robert Plant and Bert Jansch, was in Cornwall to promote his home studio produced Lockdown album, New Skin, released earlier this month.

His soulful, often lonely-sounding voice and poetic lyrics have won him awards and a comfortingly large fan base for the ballads that especially match the mood of these post-pandemic times.

He experiments with an electronic-synthesiser backing and drumbase, drew inquisitive dips and squawks from passing crows, rooks, ravens and maybe the rare choughs that nest on the cliffs nearby, and cheers from his listeners.

The sound is often compared to Tim Buckley's whose wistful recording of Dolphins, first heard nearly 50 years ago, still has the power to haunt our musical memory.

Talking of old times, the fetching pale Eau de Nil shade of Scott's compact amp, a Deco green block, suited his musical presentation, and on the rack is a 1936 manufactured guitar, noting with feeling, "she doesn't like cold weather".

His new work included the compelling Intruders on Earth and My Selfless Moon, after staring the session with Virginia, and Mona, with requested old favourites from his six former albums.

Despite the chill, and the walkie talkie wish for a helicopter to take him out of there, he was cheered for his thanks to the Minack team, who got the show on at the second attempt, and, despite an upcoming tour in much-warmer European spots, he simply said: "I think this is officially the best place in the world."

Cheers to him, for that, now, where's the brandy?

*Booking is open for performances of the Minack's first play this year, And Then Come The Nightjars by Bea Roberts, starring Steve Jacobs and Craig Johnson, directed by John Brolly, which run until Thursday June 3, each day at 3.30 and 7.30pm, except for tomorrow. Box office: 01736 810181. 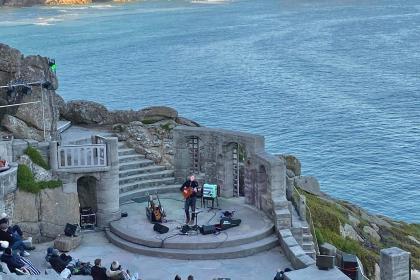 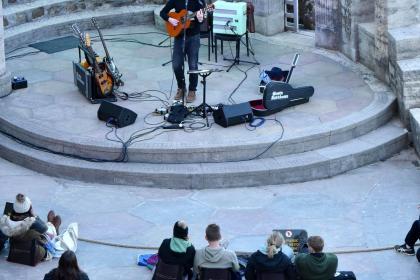 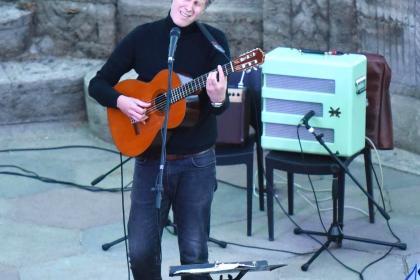 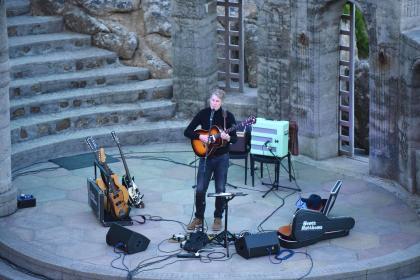 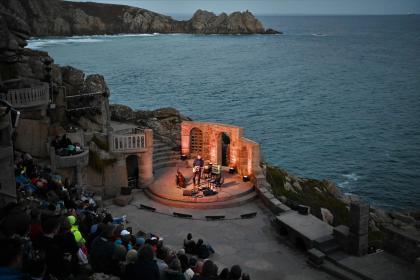 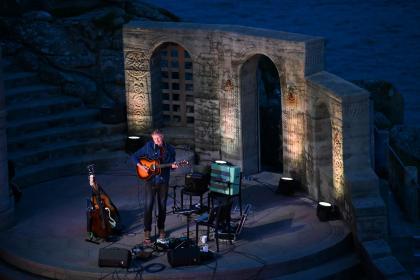 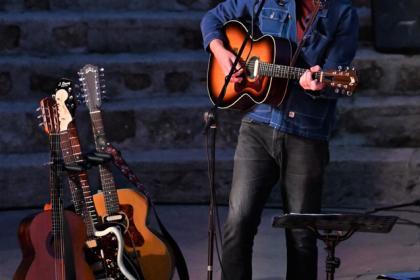 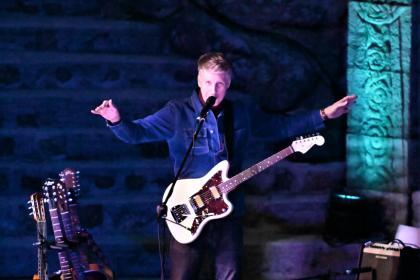