King Leontes of Sicilia appears to have it all: power, wealth, loving friends and adoring family. But, convinced his pregnant wife is having an affair with his best friend, his jealousy sets in motion a chain of events with tragic consequences…

Sixteen years later, the daughter he left to die on a remote beach has grown up into a confident young woman and is deeply in love with his best friend’s son. Her destiny leads her back to Sicilia and the father she never knew existed…

This timeless tragicomedy of obsession and redemption is a rollercoaster ride of courtroom dramas, mistaken identities, a man-eating bear and a beautiful statue, combining the tightly plotted excitement of a thriller with the mythical beauty of a fairytale.

Featuring the most famous stage direction of all time, and one of theatre’s most magical and moving denouements, Shakespeare's late, great romance weaves high drama and low comedy to tell a story of heartbreak, reunion and newfound hope.

OVO and The Maltings Theatre present another inventive, entertaining and accessible take on Shakespeare, featuring live music and plenty of laughs.

★★★★ “This glittering production offers audiences the chance to turn back time for total fun.” The Stage

Hang on a minute, why exactly is a full-on, all-American hoedown happening in what should be the kingdom of Bohemia, slap bang in the middle of one of Shakespeare's most perplexing plays? Oh, something to do with accessibility, I guess.

Sounds like a criticism, doesn't it, but in reality, OVO's production of The Winter's Tale simply broke out, as we have all been wanting to, into an episode that was sheer crazy exuberant, who cares, fast-fun with singing, dancing and music that matches our new-found freedoms.

On one of the hottest and most glorious night's of the summer so far, the sober-suited, serious start  simply melted and took flight with a rapid mood swing that was sparked by a touch of creative genius in the shape of The Bear with a humongous head and razor-sharp metallic claws.

Its maker, Sara Prinsloo, was obviously inspired to go big by Shakespeare's most famous stage direction for the soon-to-be-mauled Antigonus - "exit, pursued by a bear"!

It freed up Uruguayan actor Guido Garcia Lueches, to take on an energy-charged role as Autolycus, who is up to all sorts of mischief at the hoedown, relieving the daft as a brush shepherd boy Earl, (Lewis Jenkins) of the king's ransom that is found by his Mum, (Emma Wright) with an abandoned baby that turns out to be Princess Perdita, (Emilia Harrild).

Luckily, a gold necklace belonging to Perdita is not lost, and 16 years later, will be the key to a good life with her prince (Sam Claridge) and eventually her father the king, played by Adam Nichols, who is also Ovo's imaginative co-director with Janet Prodd.

At the start of this tale, the jealous and obsessive king does his best to spoil everything for everyone, and has his wife (Lucy Crick) killed, also losing his beloved son (Otto Lloyd-Baker/Finn Nichols), and it is only the intervention of a fast-thinking courtier (Anna Franklin) that saves the life of the impressive king of Bohemia (Mat Betteridge).

The Oracle might have spoken, via another friend (Faith Turner) to prevent the tragic events in the wintry kingdom of Sicilia, where OVOcoats must be worn to keep warm, but the nasty king is not for turning.

Anyway, Bohemia, where the fun waits, is a rhapsody of colour and good fortune, Queen hits, Bluegrass, Eighties covers and Dolly Parton style showtime, where everyone's wearing dungarees, and there's no pandemic.

Choreography is by Amy Connery and Stephanie Jones, costumes Emma Lyth and a set of contrasts, with a beautiful ice and snow draped landscape for the return to the land of OVOcoats, is by Simon Nicholas.

This Hertfordshire based theatre group won the Minack Trophy for best production five years ago with As You Like It, at its first attempt, and once again, we very much like it.

This group is unconventional, but makes sure it understands every word of the text, so that we do too. 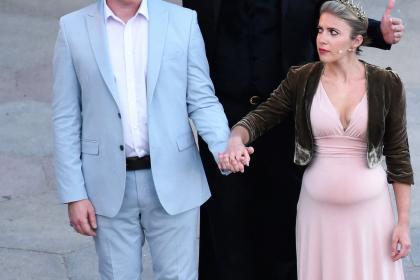 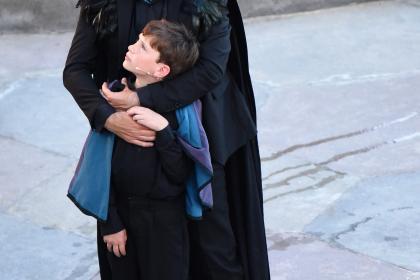 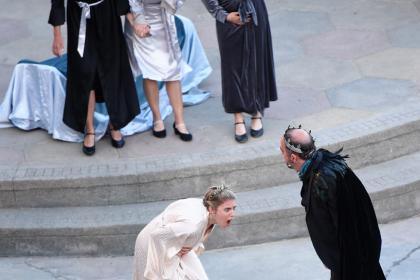 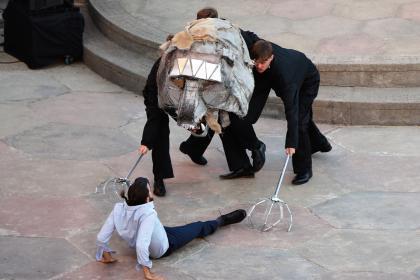 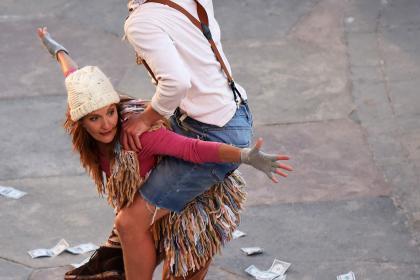 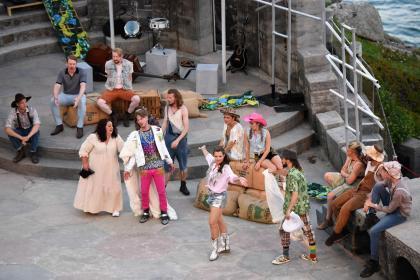 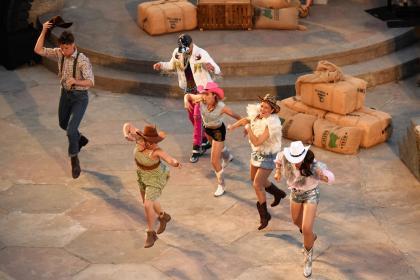 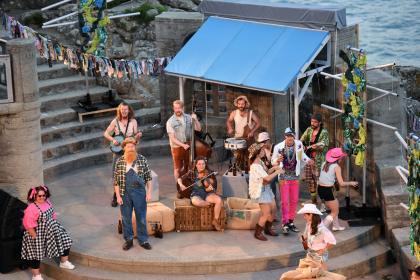 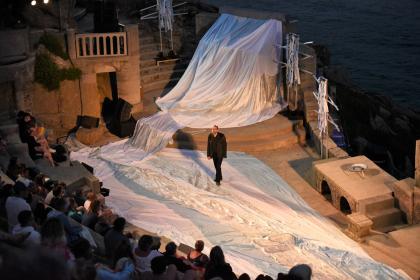 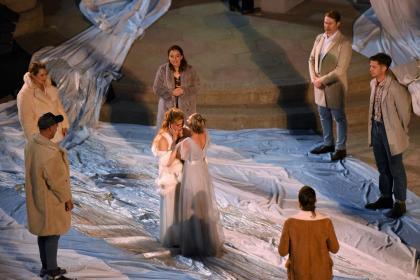