Is it possible to change?

'A Night in November’ is the stunning multi-award winning play from Marie Jones, the Writer of other hit shows such as 'Stones in his pockets' & 'Christmas Eve will kill you'. This brand new 25th Anniversary production by Soda Bread Theatre Company stars Matthew Forsythe.

Can passion really change a man?

Kenneth McAllister, a clerk in the local welfare office, is a Belfast Protestant who has followed all the rules. He loved who he was supposed to love. He lived where he was expected to live. He fought who he was taught to fight. Until one night -- a night in November - he did the most exciting, outrageous, crazy, mad thing he'd ever done.

This night in late September, one actor laid bare the pain of the bitter sectarianism of Northern Ireland, and at the same time won our hearts and minds, with a display of the all-encompassing warmth and humour that is so much a part of the complex psyche of its people.

It was disconcertingly powerful, and for me, the stand-out single performance of the season.It was riveting, deeply emotional, uncompromising  -  and often very funny. This was a tough mix, tears one minute, yells of laughter the next.

The Minack became Windsor Park, Belfast, where a World Cup football qualifier was played On A Night In November in 1993, at the height of The Troubles, when the unimaginable happened and Northern Ireland was drawn to play the Republic of Ireland.

Belfast-born actress and multi-award winning playwright Marie Jones wrote about that encounter, and the 25th anniversary of her production is being celebrated by the Soda Bread Theatre Company, which showcases the best plays and acting talent in Ireland.

She has already impressed us hugely with the West End hit, Stones In His Pockets, at the Minack.

Director Matthew McElhinney, who is Marie's son, picked an exceptional winner when he cast Matt Forsythe, in the leading and only role, for this demanding and hyper-energetic two hour drama.

His harsh Ulster accent leaves us in no doubt about the geography, but he sometimes switches to a softer lilt, in 'conversation' with the many characters that cross his path, and on the weather-delayed opening night, his multiple cues with designer Garth McConaghie's unique and precise soundtrack, were spot-on.

The set by Chris Hunter is simple and boxy, just right.

The two Matthews and producer Gerard McCabe were not even teenagers when the play was first produced, but its message resonates with each new generation  -  because it briefly blew the whistle on the bigotry, the narrow-mindedness and the deadly violence resulting from historic religious and political division between northern and southern Ireland.

The play opens in a Belfast job centre where Kenneth McCallister, a Protestant clerk in his thirties, is giving a Catholic signer-on a bad time, nastily citing bureaucracy when the hard-up father of six says he has to go to Dublin the next morning: "So you're out of the country for three hours, you're not available for work" and sends him to the back of the queue.

McCallister is shocked and smarting from the bruising experience of the FIFA match, the sectarian chants, the shaming 'trick or treat' jibes that were thrown with the atrocity that recently claimed the lives of seven in the city, the silence that marked out Jackie Charlton's Republican team win, his father-in-law's cold hatred of the green team.

Later, there's better news when he hears that he has been accepted for membership of the local golf club, getting one over on his boss, the Catholic, Gerry, who is still waiting to join.

But a change in his perception of 'the other side' is creeping up on him, and when he gives Gerry a lift to his home, crossing from one side of Belfast to the other, for the first time in his life, "and no-one took a blind bit of notice", he starts to question the old prejudices and his own lifestyle.

His observations are raw and brilliant, and a startling switch in his beliefs sees him selling his golf clubs to fund a hard-drinking trip to the skyscrapers of New York to see Jackie's Army in action on the football field.

The stadium echoes to the strains of Sweet Caroline and he finds his identity  -   we cheer his joy, before crushing news from home brings horrifying details of yet another shooting in Belfast . . . it was an emotional night in September. 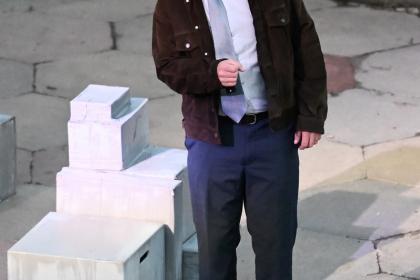 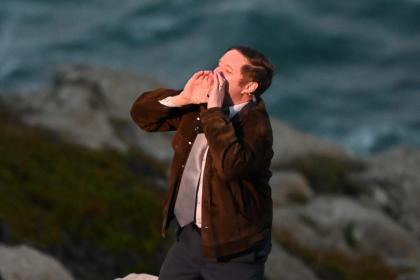 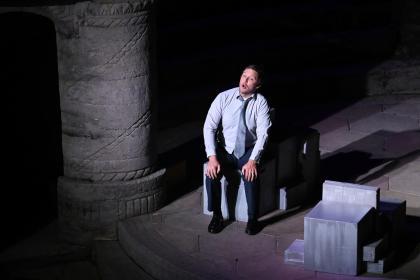 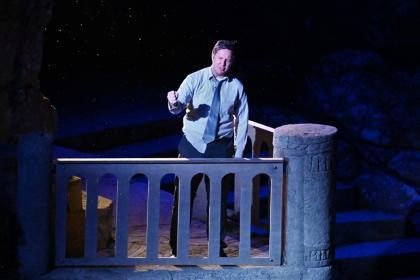 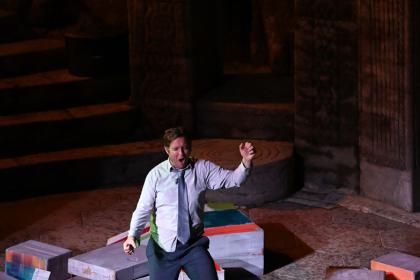 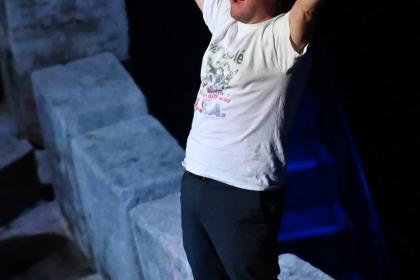 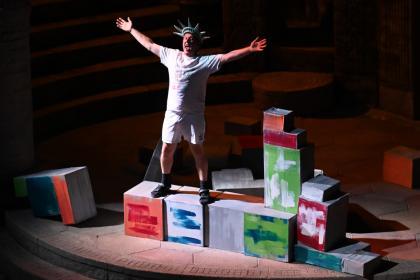 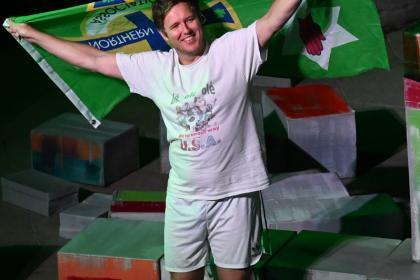 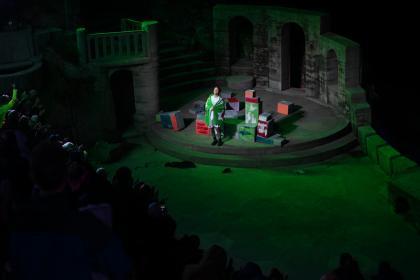 Soda Bread Theatre Company has been set up by Actor/Director Gerard McCabe to showcase the best plays and acting talent Ireland has to offer. SodaBread select shows that can get get audiences away from their box sets and down to the theatre box office.

Marie on the 25th Anniversary production:
"The actor, director and producer of this production of Night in November were not even teenagers when this play was first performed. The fact that twenty five years on it still resonates with them is humbling and the passion they bring to restaging it for another generation is incredibly exciting."

The play for which she may be best-known is Stones in His Pockets, a play based on the idea of a Hollywood film company filming a movie in a small Irish village and the resulting impact on that community. This was performed on Broadway to critical acclaim.

She has written a number of stage and television plays, including Tribes (1990), The Hamster Wheel (1991), Fighting the Shadows (1992), Wingnut and the Sprog (1994) and A Night in November (1994).  A Night in November was performed to critical acclaim all over the world.

Matthew McElhinney is a Director and Actor working on stage and screen throughout the UK and further afield. Recently he played leading roles in ‘Archy in Manhattan,’ by Marie Jones at the Grand Opera House and GBL’s dark farce ‘Three’s a Shroud’ by Stephen Large at the Waterfront Hall.

"I grew up with this play and it grew up with me. ‘A Night in November,’ is an exploration of identity written when I was beginning to form my own. It tells of one man’s triumphant journey. I watched a similar journey of triumph occur in real time from the stands of Windsor Park over the last 25 years. From the darkest days of Northern Irish football to the
accolade of ‘The Best Fans in Europe.’ Identity is defined not by our labels but by our actions. It is an honour to revive this piece for the 25th anniversary to look back and appreciate just how far we’ve come."

Recent directing credits include: ‘Footsteps in the Forest’ & ‘Waking the Giant’ (Large scale outdoor events) for Armagh, Newry & Mourne Council; ‘We’ll Walk Hand’ for GBL productions; ‘Observe the Sons of Ulster Marching towards the Somme’ for ‘Belfast Remembers,’ concert in commemoration of Armistice Day; ‘Letters from the Front,’ Co-written and developed for the Heel and Ankle Theatre Company and ‘Frank Carson; Rebel without a Pause,’ with Happenstance Productions at the Edinburgh Fringe.

Gerard has been acting/directing from 17 years of age, he was the youngest director of Belfast Fringe Festival in 1997. Since then he has worked as an actor for nearly every company in Northern Ireland and many further afield.

He has been producing theatre from 2008 when he founded Pintsized Productions as Artistic Producer and recently passed on the mantle after 10 years in charge and finished directing/producing 'Dale Farm: Seasons Of Safety’ project alongside Grand Opera House.

Matthew Forsythe is a versatile actor, performer and voiceover artist, working throughout the UK and Ireland in both theatre and television.

Originally a joiner by trade, he finally followed his aspirations and trained at Drama Studio London (2011), receiving a DaDA Award to support his studies. One of his
first roles was sharing the stage with Matthew Lewis (Neville, Harry Potter Films) and Laurence Fox (Lewis) in the acclaimed Our Boys, at the Duchess Theatre in the
West End. His performance in the controversial Mydidae by Jack Thorne at The Mac Belfast received outstanding reviews and at the same theatre, played ‘Cliff Bradshaw’ in Bruiser Theatre Company’s Cabaret. Other notable roles include ‘Dave’ in David Hull’s production of Dirty Dusting at Belfast Grand Opera House and performing at the opening of the Royal Shakespeare Company Theatre in Stratford. Matthew will be at The Mac once again this May, performing in David Hull’s production, Keep Telling Me Lies.

Television credits include BBC’s The Fall, Come Home, My Mother and Other Strangers, The Woman in White and numerous commercials.

Matthew is also a talented singer and shares the stage with his wife Michelle in their 1950s Rock ‘n’ Roll band, The Soda Popz. They have a three year old daughter Isla.