The classic French tale of Beauty and the Beast tells of a bright and beautiful young woman who is taken prisoner by a beast in his castle. She learns to look beyond the Beast's hideous exterior and realise the kind heart and soul that lies within.

The enormously popular Living Spit stars Howard Coggins and Stu McLoughlin. Howard is beautiful. There’s no escaping that. But then so is Stu. In fact, Living Spit is widely known as the most physically attractive two-man musical comedy theatre company in the South-West. However, in this tale as old as time one of them will have to portray an ugly, foul-tempered beast. But which one will it be?

From the creators of the Offie award-nominated Six Wives of Henry VIII, the perennial Christmas favourite Living Spit’s Nativity and the “beguiling rib-tickler” (The Times) Living Spit’s Frankenstein The Musical comes a brand-new, monstrously-musical, Disney-defying version of this classic French tale about what it means to be truly beautiful in the 18th century.

A well-loved tale, told with warm-hearted silliness and wit, gently reminding us that beauty is more than meets the eye. Intermission

What a beauty! There's nothing beastly about Living Spit's latest show, packed as it is with LOL, that is, lots of laughs, and some of the other too.

Clever Clevedon comedians, Howard Coggins and Stu McLoughlin, come to the Minack, newly released from their hugely successful run with Beauty And The Beast, at the Bristol Old Vic back in December.

The enforced layoff has sharpened their sense of fun, which comes with a charming counterbalance, a  sophisticated narrative to the French classic that gives erudite explanations for the "familiar tropes",  the "vignettes" and the action "that embraces conceit", giving pause to a string of earthy one-liners.

The Somerset boys swap roles, both provoking plenty of laughs as Mr Hideous Beast or the beautiful Belle, with a Dad called Lionel, and dog Flaneur  -  stroller, or loafer, in French.

Songs with ukelele or guitar, make time for rapid costume changes, and the Beast's vast chateau near the village of Trois Choux Fleurs, is represented by repeatedly stepping through a single door  -  where Belle plays French parlour games with the Beast, and admires his Pollock's and other paintings.

She might be his captive, but this prisoner appreciates Elon Musk perfume, tizer and tarte tatin, even Taco Belle wraps, after Lionel loses a bet when he is stranded on "an 18th century road, by 19th century suspension" and has to hand his daughter over.

But Belle begins to love the Beast, who has a sense of grooming, spitting on his hands to smooth his hairy eyebrow, and they sing of Stockholm Syndrome, notably displayed in real life by kidnapped heiress Patty Hearst, who fell for her terrorist abductor.

Finally the lonely beastie boy and Belle engage in an emoji exchange, with lots of kissy and smiley faces, and some hilarious confusion resulting in 'auto correction', before emerging without any oeufs on their visages, leaving the audience shaking with laughter.

TBH, this was simply the best  - catch their South West tour, if you can. 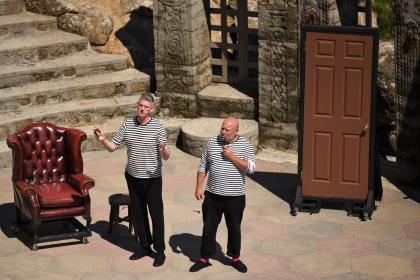 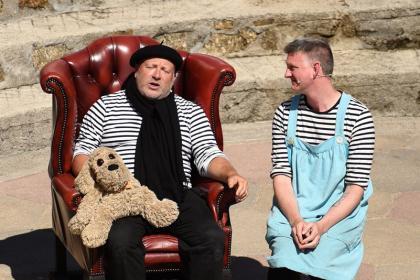 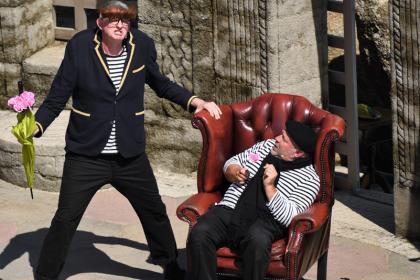 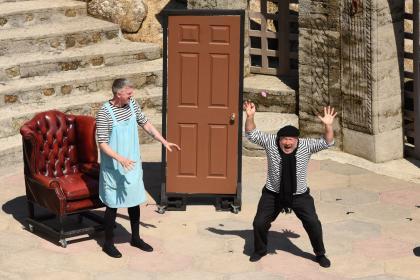 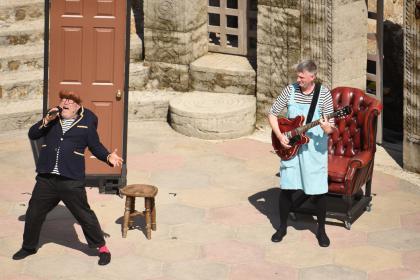 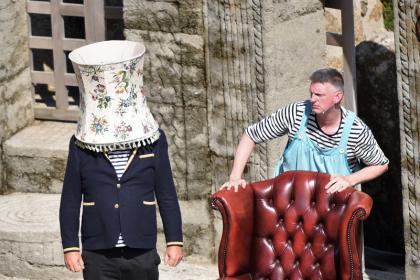 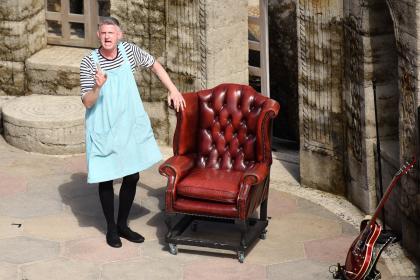 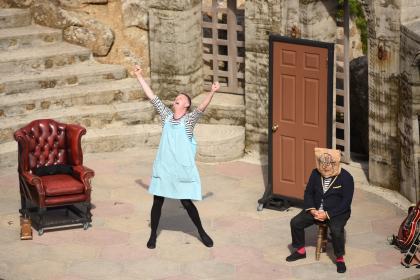 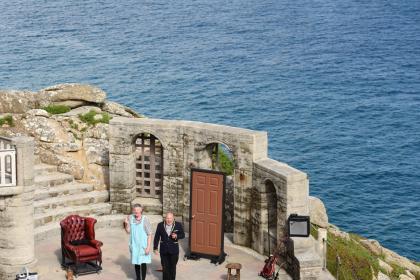