presented by The Minack Theatre and Ha Hum Ah Theatre

Three brothers, one last chance, no hope in hell…

The three Gunwallow brothers from St Day are in a bit of bother.  Slim’s scrapyard business has gone pear-shaped, while Dwayne owes money to some very dodgy friends and youngest brother Mark is entangled in a doomed romance.  All three are on the edge of meltdown, and to cap it all, Daddy’s corpse is lying upstairs waiting to be buried – if they could afford the funeral.  There’s only one hope left, they must find the legendary Lost Dutchman’s gold mine on Superstition Mountain.

What will become of three proper Cornish boys in the wilds of Arizona?  Will their private Gold Rush lead to fortune or failure?  And will they live to tell the tale…?

Part epic adventure, part family saga, at the heart of Carl Grose’s black comedy are the emotional ties and trials of three brothers, rubbing along together through thick and thin.

No matter how I struggle and strive, I'll never get out of this world alive  -  singer and songwriter Hank Williams just about sums it up, and those words haunt the raw black comedy and tragedy that immerses a Cornish trio of brothers in past and future fate.

Superstition Mountain, a play about a desperate rush for gold by the three St Day boys, who head for the Arizona desert, was first staged a decade ago, and now this Cornish drama is back, and must be seen, lit by the moon and stars at the Minack.

The decision to stage this two hour stunner outdoors in March was as risky as the boys' journey to the US, but the weather set fair at last for the week long run, rewarding the epic production team and actors with much-needed funds after Covid induced near starvation, and giving its audiences an experience to treasure.

Cornishman Carl Grose says he wrote the narrative in a creative flurry, and that's how it comes out. The brawling brothers don't hold back, they are loud and brutal. They make their point in a stream of words of four letters - why make them longer?

The Gunwallow boys were born in their Daddy's scrapyard, having apparently been conceived, in two cases, at the Redruth Cinema and in his pride-and-joy 1953 vintage Cadillac Eldorado  -  and there's more to be revealed about the third 'coupling'.

The play opens bleakly with the death of that Daddy and the reality that he has left them with an eye-wateringly huge unpaid tax demand.

They have just one option  -  to seek their fortune in a legendary goldmine in America - and decide they might as well go for broke...

This Ha-Hum-Ah Theatre production stars three proper Cornish actors who are making their names on the stage, in film and television, with the kind of talent the Minack has been promoting for 90 amazing years, and they are impeccably directed for the first time by Millie Brolly, who 'grew up' at the theatre, acting on that legendary stage since she was very, very young.

Ben Kernow plays eldest brother Slim, who simmers with bitter rage and will defend his family name to the end, next in line is Darren Seed, a mouthy thinks-he-knows-it-all Dwayne, who is generally regarded as a twat, even by his friends, and finally the youngest, Mark, played by Jack Brownridge-Kelly, a peacemaker, sweet, even, who is sneeringly called "little sister" by the big boys.

The three spark off one another like a prospector's shovel hitting rock. They are ever edgy and fizzing with energy in a gripping male choreography that is brilliantly managed and balanced.

The set is spot-on poor and worn, their scrap metal littered home fails to even offer cold comfort. The switch to the US, seated for the flight on a tight trio of plane seats, is finely devised by designer Marion Harrison, and built by Lynn Batten and David Gibson. Their destination in the desert, via Apache Junction, and the mine accessed by a ladder, is a perfect fit for the granite stage.

This is teamwork at its best, with Rory Lock on cue as lighting and sound operator for Simon Hutchings dramatic design.

The boys might struggle and strive in noisy desperation, and they are a step away from disaster, but this play is immensely funny, and even if they don't get out of this world alive, they emphatically struck gold at the Minack. 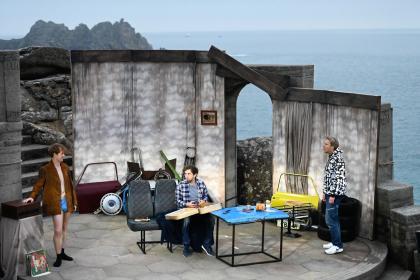 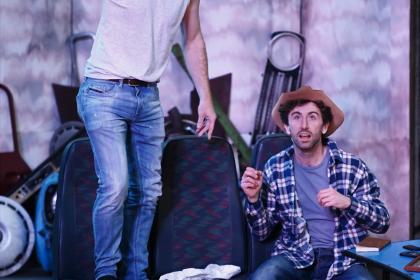 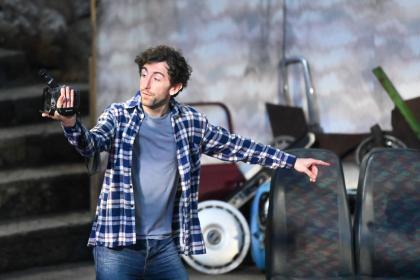 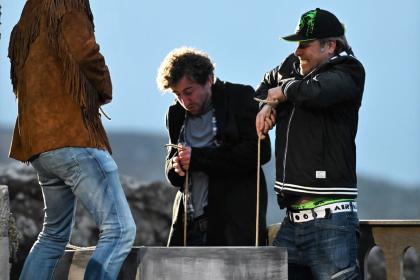 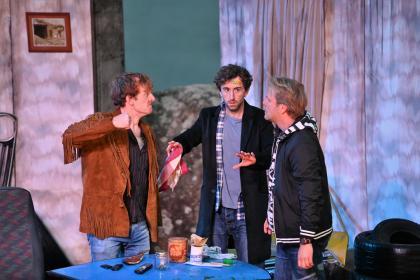 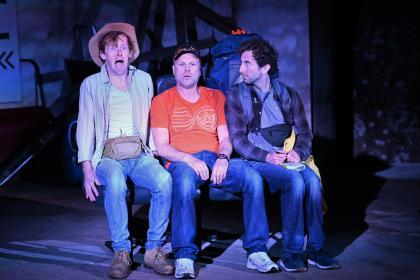 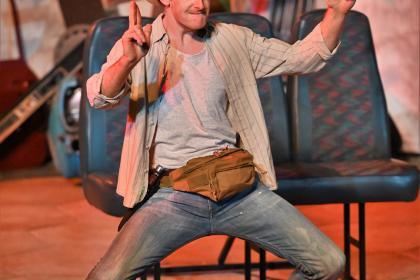 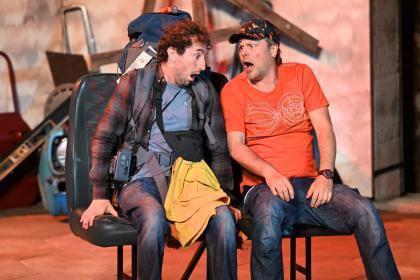 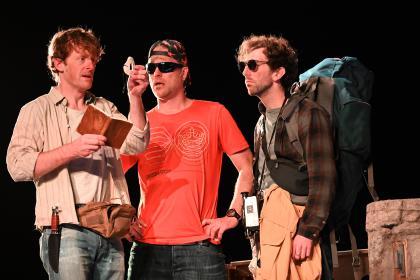 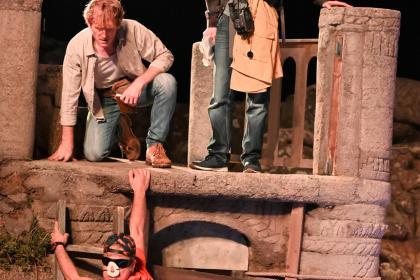 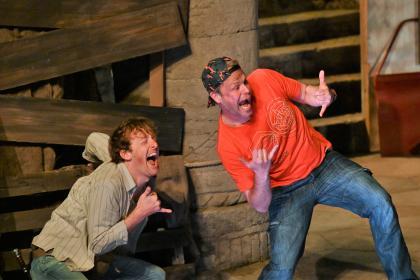 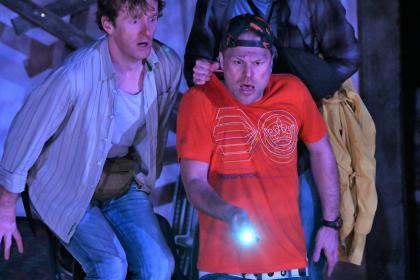