For over a decade, The Oggymen have championed contemporary Cornish folk music and celebrated those precious songs that bind us to our landscape, to our community and to our past. In the year where our horizons have become hidden, our sense of place has never felt so important.  At the iconic setting of The Minack Theatre, join The Oggymen to hear their acclaimed arrangements of the songs that have been sung in communities of Cornish people past and present.  Their wide repertoire ranges from trade union songs appropriated by Cornish miners in the 1980’s, to those songs sung at Falmouth Working Boat regattas and Cornish pilot gig races within recent memory. The concert will also feature tracks from their critically acclaimed fourth album, ‘How It Belongs To Be’.

Ten warm Cornish male voices singing in close harmony, on a granite cliff and with a dusky orange full moon finally appearing over the horizon on a hot night in August  - that's How It Belongs To Be.

For The Oggymen, the contemporary Cornish folk group that is based in nearby Falmouth, the gig at The Minack open air theatre was their biggest so far. They were performing for a sold out audience of nearly 700 tourists and locals, and the pleasure was all theirs, and ours.

Ironically, they had been waiting for around two years to make music on that famous stage, after the first show was washed out. This time, they performed in the midst of a record-making drought.

Well, the wait was worth it, and in the meantime they have released their fourth album, entitled How It Belongs To Be, with some gorgeous songs and interpretations, including Charles Causley's, My Young Man's A Cornishman, a downbeat Camborne Hill, celebrating the remarkable engineer Richard Trevithick, "the greatest Cornish person that ever lived", and the cheeky I'm My Own Grandpa.

The really deep bass voices of Jon Dennis and Jack Kernow, who sang an equally deeply moving solo for The Last Leviathan, a lament for the end of a great whale, give this line-up a solid foundation reminiscent of the great male voice choirs of the past.

Simply standing in a line and singing in harmony, with several party pieces between them, they are bound to be compared to The Fisherman's Friends from across the peninsula at Port Isaac. But these boys have their own identity and their songs come from closer to their homes.

They included Seth Lakeman's tragic account of the Penlee Lifeboat disaster of 1981, when the Solomon Browne and the crew from Mousehole were lost during a heroic rescue attempt, just a few days before Christmas.

Also Flora Day, when "I wish I was in Helston" and their signature song written by Harry Glasson from Marazion, Cornwall My Home, as well as The Oggyman, of course.

Further from home came Queen's Fat Bottomed Girls and an exciting Whiplash medley including the song sung by Frankie Laine, from one of the best-ever series of television cowboy yarns - Rawhide.

All is gay in Carbis Bay came via Baby Train, and sailing homeward to Falmouth Bay with their Boat Song. There was also a call at the Tinner's Arms, Zennor, riding in My Honda 50.

During the interval, John Dowling from Redruth played his own thrumming banjo compositions, including a tribute to the ill-fated sailor Donald Crowhurst. 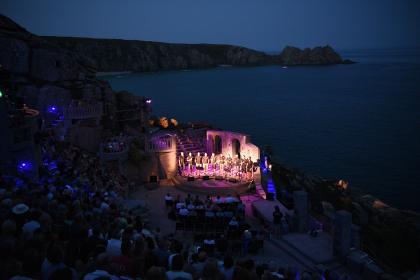