An Audience with Molly

An Audience with Molly

Molly Hocking (The Voice UK, winner 2019) will take the stage with her band of talented musicians, to perform a spectacular concert and take you on her music journey in song and dialogue. You will get an insight into her life and experience of the industry so far, enjoy classic covers and some of Molly’s new original music - plus a few duets with some special guests who have influenced her love of performing.

At 18, local girl Molly entered ITV's The Voice UK and ended up  winning the whole competition against tens of thousands of entrants. Her winning song got to Number 1 on the ITunes Charts, saw her perform at the O2 with Olly Murs, at British Summertime Hyde Park alongside the likes of Celine Dion and earn Special Guest singer status onboard P & O Britannia - a position she will resume this summer on 35 cruise dates worldwide…

‘I performed here in a show with my local theatre group Kidz r Us when I was 11. Never did I think I would come back and headline my own concert. I cannot wait to tell everyone what I’ve been doing since winning The Voice and what I’ve got planned... it will be a magical night of music with my amazing band.’

Listen to Molly on Spotify

Small wonder that Molly Hocking sings We Can Have The World Tonight - she means it . . . and she will probably get it. Having won television's The Voice, at just 19 years old, she has a rare star quality that puts her on top of the world.

During the three years since then, Molly has performed with Olly Murs, appearing at the O2, and Hyde Park in London, but returned to her roots to headline at The Minack, with 'a homecoming concert'. The singer grew up in St Ives and first appeared at the theatre under the stars 10 years ago, with Kids R Us.

It gave her the best start in the world of show business, and in recognition of that experience, her first special guest was Phil Barnett, the local legend who co-founded and directed the award-winning theatre company, earning the Queen's British Empire Medal along the way.

They sang together, so sensitively accompanied by another star of Kids R Us, Tom Quirke on keyboards, who was joined by an impeccably rehearsed band, Jamie David on lead guitar, Alex Black bass, and Michael Hollywood playing drums.

Molly is at the cutting edge of contemporary music, putting on her "Beyonce face" and placing her own emotional take on the songs of Lady GaGa's La Vie En Rose and Paloma Faith's Upside Down, with the best of Ed Sheeran, Amy Winehouse, George Ezra, and of course, Sam Ryder's Space Man.

But her own songs match all of those, and her selection included I'll Never Love Again, Alive, Grow Old With Me, and her new release, Bones, written for her mum, Sarah, who runs her daughter's 'merch' stand, as well as her own stylish boutique, Fabulous-St Ives.

Talking of style, Molly looked gorgeous with her sleek sable hair cut in a short bob, and wearing black leather boots and jacket over a 'wedding dress' confection of a frock of frothy coffee and vanilla flounces.

The outfit complimented a remarkable voice that wraps itself around you, but stays beguilingly lonely, appealing, somehow apart, distanced by her admitted lack of confidence. It is the conundrum that is her, but the quality is clear.

Her second special guest was her grandad, Pops, Michael Friggens. Now we know where that perfect pitch and instinctive phrasing originated. His Wonderful World was indeed wonderful, and he gave us a treasured anecdote of meeting the Minack's founder, Rowena Cade, in the sixties, when he met her with "a little trowel and bucket" still working at evolving her cliff theatre.

Molly took us on a musical journey and her fans will be right there, when her voice takes her around the world.

*The concert was held 24 hours after the Queen's death was announced. After consultation, the Minack was given the go-ahead and a two minute silence was held, before the audience stood for the National Anthem.

We Can Have the World Tonight 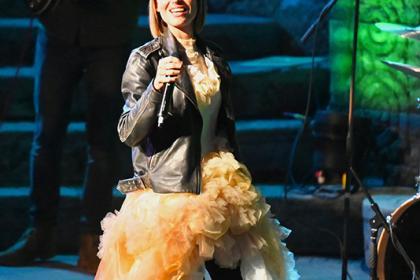 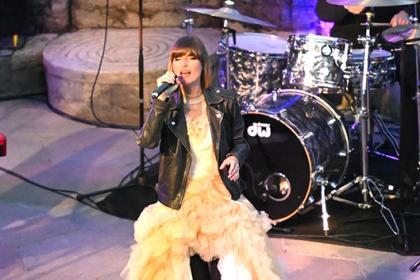 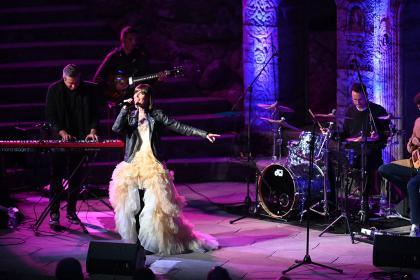 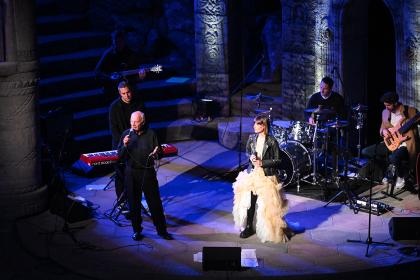 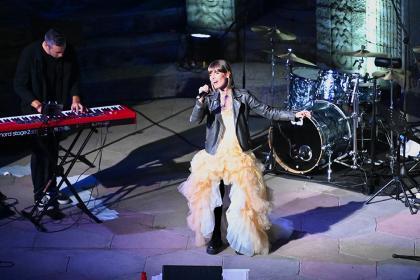