Who cares what becomes of the ocean?

Pupils from West Cornwall schools will come together in July to perform a heart-wrenching musical, led by The Minack Theatre in partnership with Cornwall Music Service Trust.

Ocean World follows a hump-backed whale and her young calf as they make the perilous journey from the southern seas to their feeding grounds in the North Atlantic.  Their story is told through music, dance and song, as they face each challenge that threatens their survival and that of their whole world.

Written in 1990 by Peter Rose and Anne Conlon, Ocean World was commissioned by WWF and was premiered at the Royal Festival Hall. It was also shown as part of Channel 4’s Fragile Earth series in 1991, when the narration was spoken by Sir David Attenborough.  Although it is thirty years old, its message is even more urgent today.

Read the programme for Ocean World

Audiences at the Minack Theatre finally saw the musical undersea odyssey with a message that captivated the First Lady of the United States and the new wife of the Prime Minister, when they visited with the partners of the G7 conference leaders last month.

Dr Jill Biden, a community college educator and Carrie Symonds, an animal rights and welfare campaigner, were enchanted by a short version of Ocean World, performed by Duchy students of music, dance and theatre, when they called in during an away day from Carbis Bay, where the conference was held.

Nine primary schools, the Cornwall Youth Chamber Choir and Lockwood-Urban Dance and Theatre School in Newlyn, rehearsed for months in isolation during lockdown, before coming together to perform this moving story about the perils of polluting the world's wonderful oceans.

Families of the students were able to see it, but pandemic distancing rules, which were only relaxed on Monday, resulted in restricted audiences last week, so members of the public were disappointed.

The production was a triumph for Minack executive director Zoe Curnow and the theatre's associate director John Brolly, who performed in an Ocean World concert in Penzance 30 years ago.

Both stress that the ecological message portrayed by musician Peter Rose with Anne Conlon, who wrote the lyrics and narrative for the work commissioned by the World Wildlife Fund, is "sadly as relevant today as it was in 1970".

Since then, they have put the mass schools project together in partnership with the Cornwall Music Service Trust, with the support of the county Music Education Hub and the Minack’s youth groups, to encourage primary school children to take part in the performing arts.

Ocean World tells the story of a hump-backed whale and its young calf as they encounter the perils of life in the deep ocean, where plastics, pollutants, sonar and factory fishing impact their lives.

It might be a harsh environment at times, but there is a lyrical beauty to this piece, and what better than the ocean backdrop at the Minack on a perfect summer evening, to stage this work.

They were in harmony with the splendidly designed and woven whales made by Alice King, held aloft as they 'swam' with circling tissue dolphins and vast shoals of papier golden fish, with an octopus 'maypole' of brilliant orange streamers.

This was a production the children will remember for the rest of their lives, having explored "the special world of water" in such a memorable way. 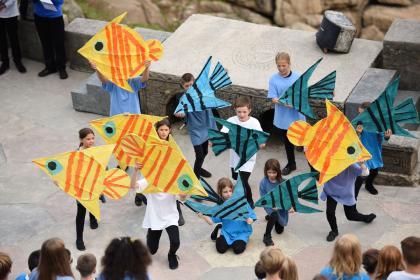 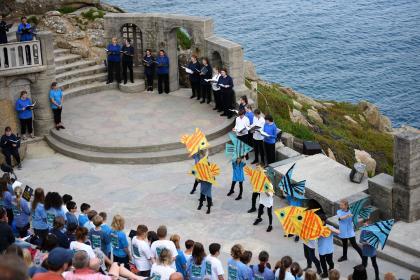 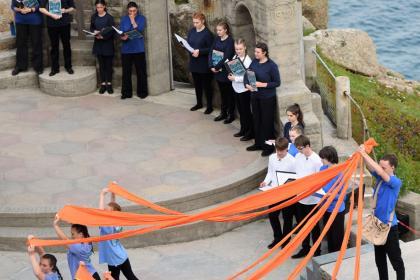 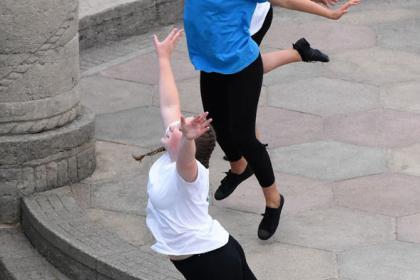 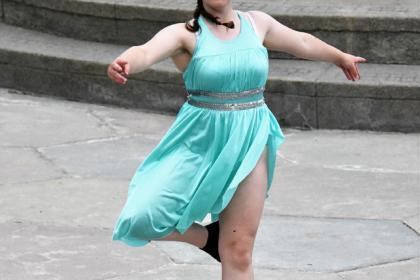 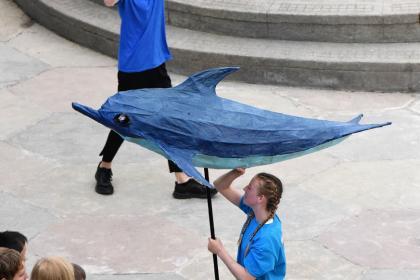 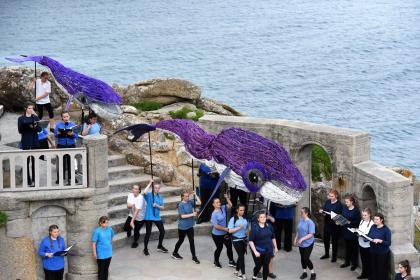 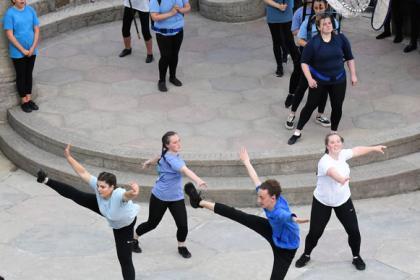 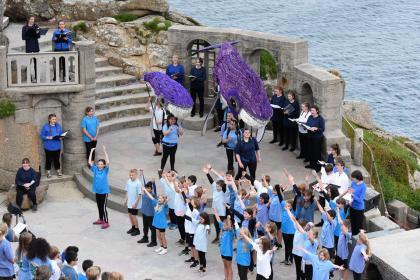 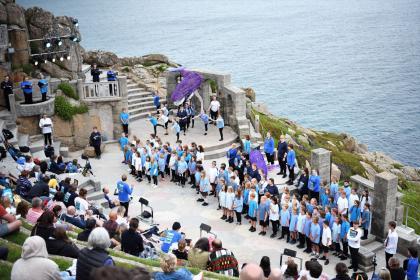 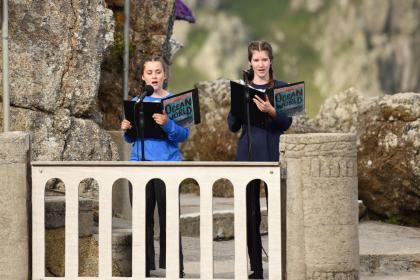 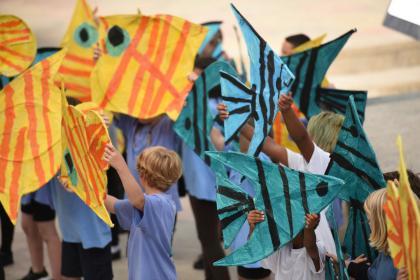 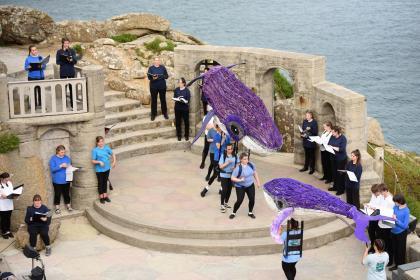 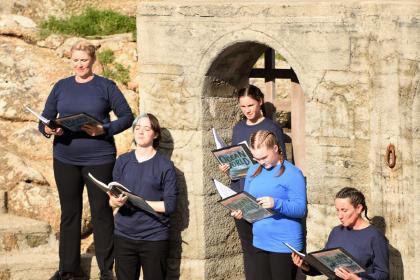 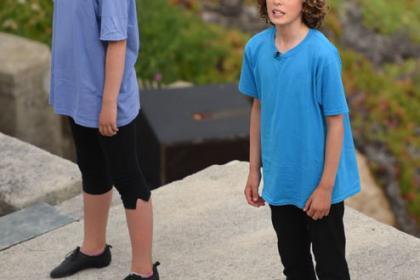 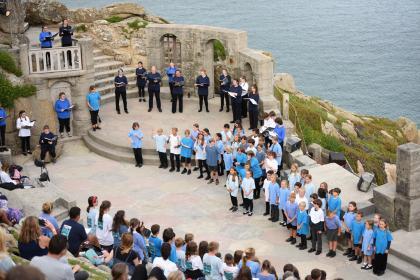 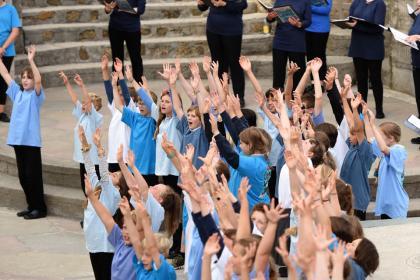 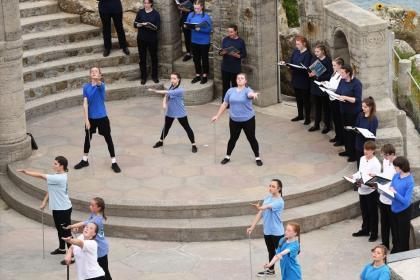 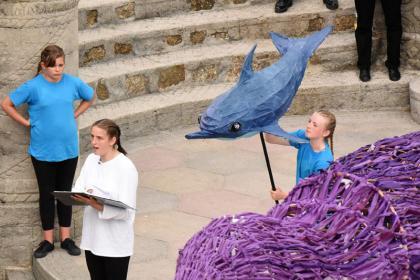 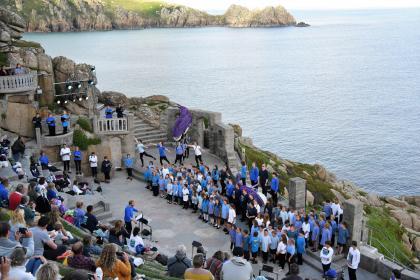 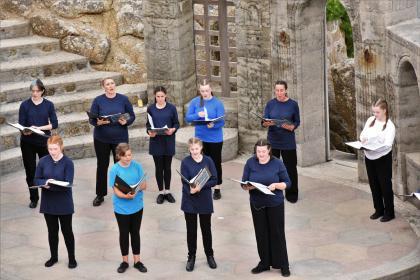