Cornish Folk songs delivered with passion and presence, honesty and intensity.  A delightful insight into Cornwall’s rich history and heritage.  Will Keating’s velvety tones will set you on a roller coaster of emotions that will bring a tear to your eye, singing along and tapping your feet.

Will Keating will be performing traditional Cornish Folk favourites as well as songs from his highly acclaimed debut solo album, Cornwall My Home (Kernow Ow Thre).  This will be an exceptional one-off evening of entertainment at Cornwall’s most iconic venue.

Simply a night to remember!

A treat of a Cornish folk gig gave a sellout audience a rare chance to hear the throaty words of a living song writing legend performing with Will Keating, the man he mentored.

Marazion's Harry Glasson joined his protege Will for a truly memorable performance singing the best songs from an album made to celebrate his work.

It showed that where there's a Will, there's a way, and thanks to the miracle of modern medicine, and the friend who has also given his music a new lease of life, the pair were able to stand shoulder to shoulder on the Minack stage, to enthrall one and all.

Just over 10 years ago, cancer robbed Harry of his vocal chords and voice box, a near tragedy for a man who wrote Cornwall My Home, the most beautiful and sentimental poem by a homesick boy, who joined the Navy when he was barely 16 years old.

But it wasn't all over for Harry, who will be 70 next year, because Falmouth folk singer Will Keating started to put together a tribute album of his songs, and Harry got to grips with a throat valve gizmo that gave him back a growly voice to complement his naughty sense of humour.

Will, a warm and engaging folk singer, with acoustic guitar and stomp box, beamed throughout, and was clearly living a dream, in company with Harry and choruses from his four lovely young daughters.

The words that introduce Cornwall My Home, or Kernow Ow Thre  -  "I've stood on Cape Cornwall in the sun's evening glow...." were sung in both English and Cornish, triggering cheers and St Piran's flags were waved in time to a string of many more Harry specials, and Will's own work.

The selection ranged from the spirited Going Aboard The Steamer (with a bloody big gun), to My Little Black Eyed Duck, to Men of Cornwall and a celebration of Cornwall's heritage, its saints, miners, fishermen and farmers.

Stirring, granite-strong songs told of the closing and later the re-opening of the South Crofty mine, where the Camborne boys break tin from stone, "in a country and land we love the best", with a proud nod to the inspiration of Trelawny and Trevithick.

Harry recalled simple pleasures, "a pasty in my hand" and "building castles in the sand" as well as falling in love every week in the summer, with tourist girlfriends.

He sang A Letter Home, a Cousin Jack writing from Australia to say "it's funny, but I really miss the rain", and he re-told the legend that Jesus left the shores of Galilee to come to Cornwall with his uncle from Aramathea, who traded in tin.

Will gave us The Sweet Fair Maid of Zennor, remembering the album photoshoot at Boat Cove near Pendeen, and The White Rose  -  "so sad, it makes you happy".

Then it was on to a rousing selection that ranged from Way Down to Lamorna to the Helston Flora Day and Camborne Hill, of course.

Taking a bow with his daughters, Will looked around the Minack setting and said: "It couldn't get better than this, could it"  -  no, it couldn't. 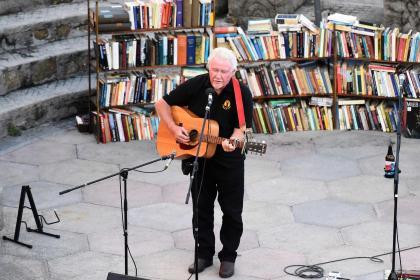 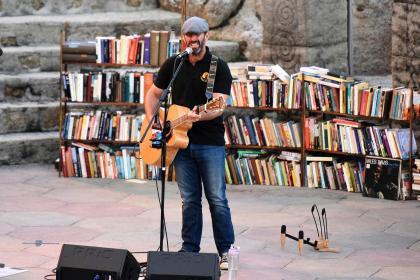 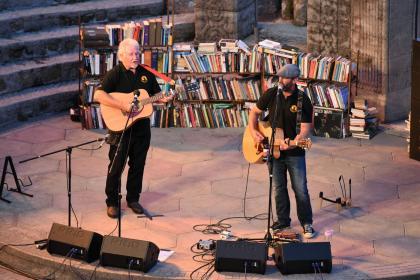 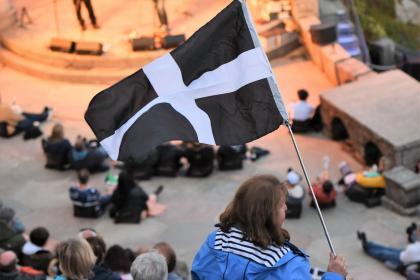