A soldier coming home on leave meets the Devil on a lonely road.  The fiend persuades him to part with his most treasured possession, his fiddle, in exchange for a magical book.  The book enables him to gain immense wealth, but not happiness, so he sets out to reclaim his fiddle.  But a deal with the Devil is not so easily cancelled.

Based on a Russian folk tale, Stravinsky’s enchanting piece for chamber orchestra and actors is narrated and performed by a team of professional Cornish actors and musicians, conducted by Patrick Bailey.

They say the Devil has all the best tunes, so beware, lest you fall under his spell….

Stravinsky composed and designed The Soldier's Tale, to be played by a small company of seven musicians, plus narrator, as a touring theatre and rapid rouble earner - but guess what, it was 1918 and Russian entertainers were immediately locked-down, in the face of a world pandemic that claimed the lives of millions.

Conductor and musical director Patrick Bailey haunted us with that chilling fact, when he introduced his musicians to the Minack audience that has been shrunk by nearly three quarters, from the usual 800 ticket holders, as we tackle Covid-19.

In another sign of the times, when clarinetist David White's musical score looked ready to take flight in a sudden swirl of a summer breeze, trumpet player Stephanie Barry came to the rescue by securing it with the elastic of her face mask.

The Soldier's Tale is based on a Russian folk story that runs along the lines of selling your soul to the Devil. It was written fast, needs-must, Stravinsky needed to eat, and the music is vivid, earthy and modern.

Fittingly, the narrator was John Brolly, the theatre's very own story teller, who meets the Devil on his way home on leave, and exchanges his treasured violin for the 'magical' book that will make him wealthy.

It doesn't quite work out like that, and the Soldier has to try to put the wrong to right. But the Devil is not playing ball.

The narrator marched us through the tale, imitating the violinist, although his bow technique needs refining, and someone needs to find a Russian cap to replace his unsuitable pork pie hat!

These might be troubled times, but everyone lucky enough to be there, was simply happy listening to 'live' music once again. 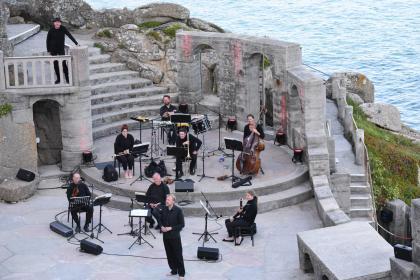 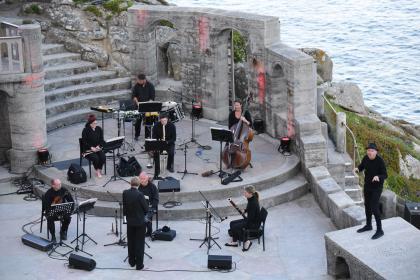 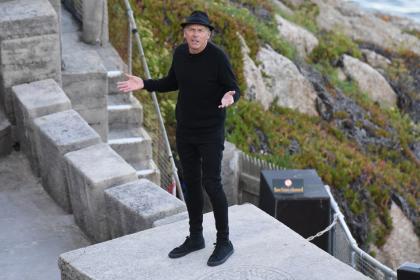