Two Actors. Too Many Characters.

​Howard Coggins looks like Henry VIII. There's no escaping that.
​
Stu McLoughlin doesn't look like any of the wives, but he's going to give it a go.
​
After their previous self-funded historical drama is savaged in the press, Howard and Stu are at their wits end.
​
Then they hit on an idea for a show that could change everything....
​
But can two of the South West's favourite theatrical sons put aside their differences and make it through to the end without killing each other?
​
'The Six Wives of Henry VIII' was an undisputed hit at the Bristol Old Vic and with live original music, embroidery, Barbie dolls, silly songs and historical hysteria, this promises to be an ill-researched lesson in Tudor history you'll never forget.

‘The Six Wives of Henry VIII’ is a storming, surprising and sassy night out. The music is as cool as the wives are hot and, amidst the sharp dialogue, witty characters, deft theatricality and bloody fascinating history, I was genuinely moved. Cracking storytelling and a top night out’

Stung by a really, really bad press review many, many years ago, Howard Coggins and Stu McLoughlin hit on the concept of writing and singing their very own tragically hysterical history of the six wives of Henry VIII  -  you know, divorced, beheaded, died, and so on.

That review, by one Jeremy Parker, sets the scene for this surprising, sharply observed, fresh and original view of the Tudor king, who wedded and bedded all those wives almost as swiftly as he stitched squirrels on to a set of court cushions.

Twenty years on, this affectionate duo, Howard the huggable self-doubter, and Stu, the sparely-built exhibitionist strutter, have won fans from the Edinburgh Fringe to Bristol, with their witty take on all kinds of well-known books and plays, not just history.

They call themselves Living Spit, because Howard is the image of Henry, even when he's wearing a short sleeved cotton shirt and jeans.

Directed by Craig Edwards, the dialogue switches in a flash from cheeky, to cheesy, to chiding, to sheer sadness via skits based on Britain's Got Talent and Blind Date, as Henry seeks to swap his Spanish first wife "old paella face" for Miss Boleyn.

Next up is the sweet Jane Seymour, the joyfully pregnant mother to be of his much-needed male heir, Edward VI.

She sits beside the squirrel-embroidering Henry, busy with her stitching of Battersea Power Station, and sighing "I can't seem to get the fourth chimney right".

All of his wives are played by Stu in a becoming array of skimpy shift dresses, although the reputably 'horse-faced' German, Anne of Cleves cuts a severe figure, giving him the once-over in heavy framed glasses.

It is the keen modernist perspective, attention to detail and many asides, plus an enlivening sprinkling of bluesy-to-rap songs that frequently burst out of Howard at terrific volume, with guitar and falsetto choruses from Stu, that combine to give us great entertainment in all kinds of unexpected ways.

Maybe it was Boris's latest lockdown announcement that keenly enhanced our appreciation during a chill and blowy evening at the very end of October, but this show was truly something to savour.

So, forget Jeremy Parker and his kind, this "critical crony" has no hesitation in awarding it a regal five stars. 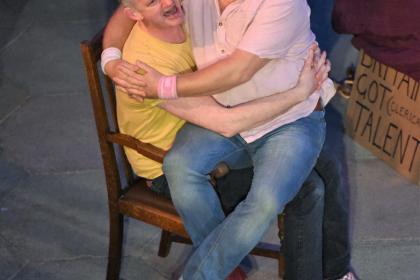 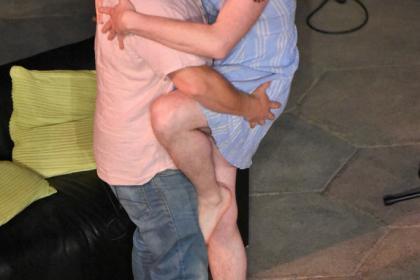 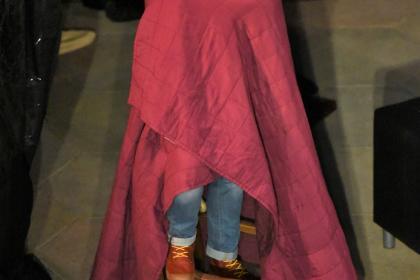 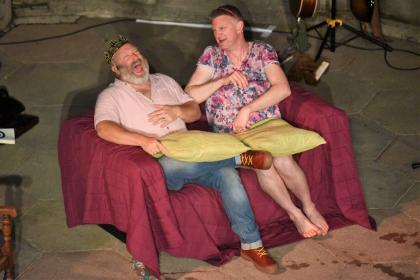 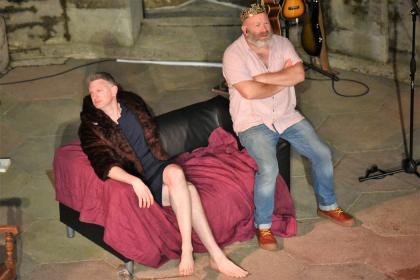