Join us for a unique summer evening with internationally renowned harpist Ruth Wall.  Performing on her three distinctive harps, Ruth plays an enchanting mix of old and new tunes from around the British Isles.  From Highland jigs and Welsh folksongs to Irish laments and Classical favourites she celebrates the range of music for these majestic instruments, with a few surprises up her sleeve.

The evening will be introduced by celebrated composer Graham Fitkin.

The coronavirus pandemic has projected us into so many unexpected experiences this summer, which is how a fascinated Minack audience found itself listening to a harp masterclass under a near-full-moon in the latest of the Musical Mondays series.

This was a rare opportunity to hear the work of West Cornwall harpist Ruth Wall and her composer partner Graham Fitkin, who are both internationally regarded as being the finest in their own individual fields, and would find themselves playing all over the world under different circumstances.

Ruth set up four of her instruments to demonstrate their very different characteristics, often via rhythmic or minimalist electronically supported compositions, many of them by Graham.

In an outdoor setting, the Renaissance Bray harp, with its robust resonance and "buzzy" string sounds that come from attaching them in Holly wood, matched the elements and the rugged granite backdrop, with the Logan Rock as its crown.

Ruth was taking no chances on a chill early autumn evening, wearing hand-warmers, boots, beret and an elegant wool jacket, while coaxing the temperature-reactive harps into tune.

Graham knows the Minack well, having practically grown up there, when his parents were in charge of lighting and prompt for many years. It was where he first acted in Macbeth as a seven year old, relishing the chance to say "bloody" without a telling-off, in his role as an apparition.

Fortunately, the sea was as gentle as the effect of the many lilting tunes selected by Highland lass Ruth, who introduced music from Scotland, Ireland, England and Wales.

The programme included traditional tunes, The Blacksmith, and Wild Mountain Thyme, her own work, Pibroch Patterns and Peninsular Run, contrasting with Graham's contemporary Powder Trap, Exit Music and the new and dynamic Seventeen and a Half Come Sunday.

And to keep their hands warm and give the audience a chance to tap its cold feet, the two concentrated hard to shift in and out of unison for Steve Reich's catchy Clapping Music.

Ruth gave a special thank you to medical staff from the Helston Hospital, who were in the audience, but pandemic problems seemed far away as we mused beneath the moon and watched the huge Minack Rock seal pop his enormous head out of the water to listen along with us music lovers. 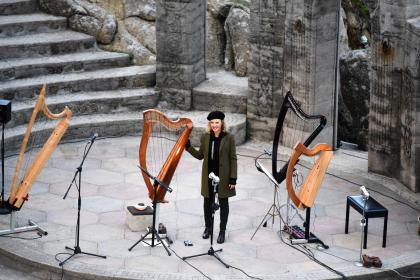 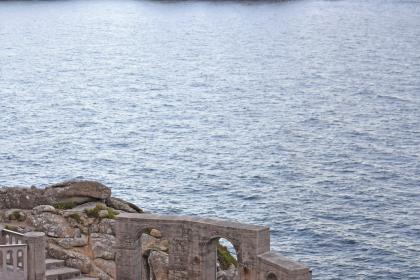 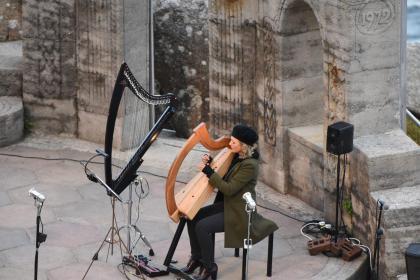 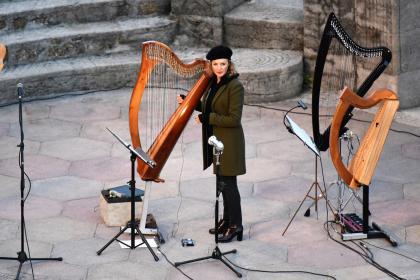 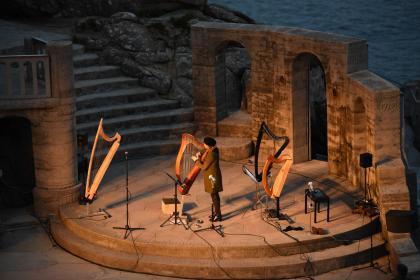 Scottish harpist Ruth Wall has performed at the Royal Albert Hall, Sydney Opera House, Royal Opera House, Gucci 75th celebrations in Rome and Florence, Radio City New York, as part of the London Olympic celebrations and for the HRH Prince of Wales and HRH The Queen.  She has performed as a soloist with the London Chamber Orchestra and the BBC Concert Orchestra and toured extensively with British band Goldfrapp, Kathryn Tickell and her partner the composer Graham Fitkin.

She has recorded at Abbey Road, Maida Vale Studios and has appeared on BBC Radios 1, 2, 3 and 4 and on on TV – Jools Holland and Jay Leno’s shows amongst others. In 2014 she toured to Castles and palaces in the UK including Holkham Hall, Fyvie Castle, Culzean Castle, Glendurgan and Lacock Abbey with her album The Three Harps of Christmas.