An evening of glorious arias, seductive duets and soulful serenades, from Mozart to Lehar, and Puccini to The Pirates of Penzance.  Sit back and enjoy some of the greatest operatic songs performed by three talented young artists.

Lights, music  -  moon and stars! Very few theatres in the world can provide the last two elements right on cue, but even this late in the season it can happen at the magical Minack.

On the opening night, on what has almost miraculously become a Musical Monday during this uncertain pandemic period, the rain clouds cleared just in time, and an almost full moon flung a shimmering beam across the sea to flood the stage and give us what was promised  - Opera Under The Stars.

It was a leap of faith to give this delightful outdoor programme such an optimistic title, but then so much of what has been happening at the Minack this year has been exactly that, and how hugely grateful we are for such stimulating live entertainment, when we thought there might be none.

Even better has been its quality, and the singers that gathered with impeccable piano accompanist Timothy Dean to please us with a programme of familiar arias, duets and serenades, performed exquisitely.

Tim is very much Cornwall's gain. Having moved to the Duchy a couple of years ago, as a former artistic director of the Royal Conservatoire of Scotland, he is a veteran of creating and giving concerts with young singers all over the far north.

Soaring soprano Rose Stachniewska came via the Conservatoire and Royal College of Music to perform for the second time at the Minack, after the triumphant production of Monteverdi's Orfeo, and very fine baritone Jerome Knox joined her with the rich tenor voice of Ryan Vaughan Davies from Wales.

They combined to enhance our senses in the company of Don Giovanni, Pagliacci, Bizet's Pearlfishers, Britten's Billy Budd, Lehar's Merry Widow, the lovesick Rodolfo and Marcello from Puccini's La Boheme, Verdi's La Traviata and many more favourite moments, including a buzzy Fly Duet by Offenbach.

And, of course, Frederic and Mabel found themselves "in an unfortunate position" in Gilbert and Sullivan's, The Pirates of Penzance, while HMS Pinafore's Captain Corcoran very appropriately turned to the sky for Fair Moon To Thee I Sing. 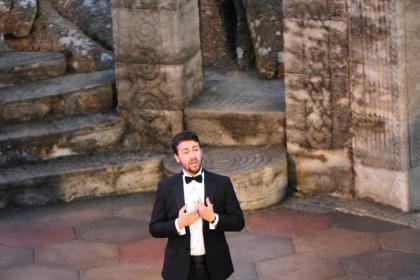 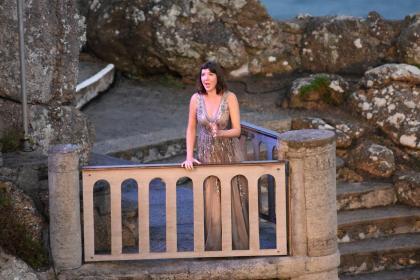 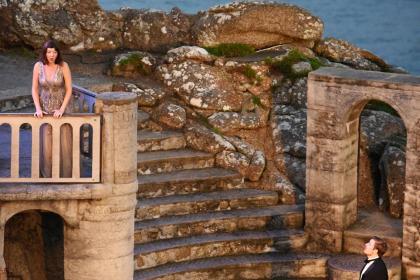 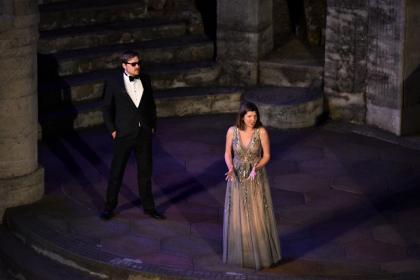 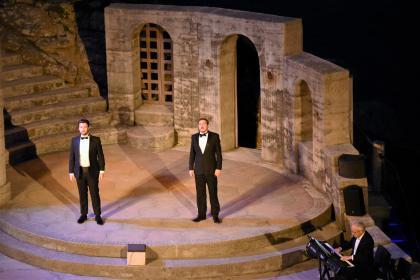 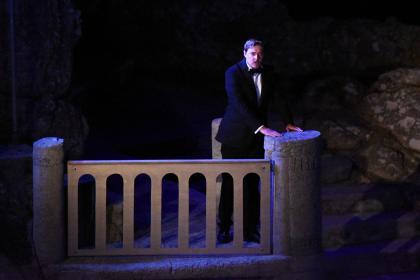 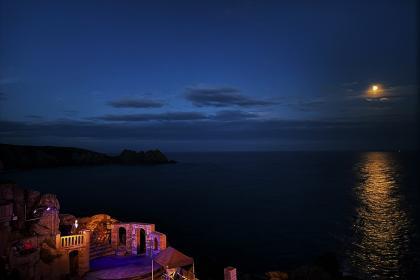 British soprano Rose Stachniewska is a Samling artist and Britten- Pears Young Artist.  She graduated from the Royal Conservatoire of Scotland (RCS) where she studied with Wilma MacDougall and won first prize in the Ye Cronies Opera Competition. She graduated with distinction in her master’s from the Royal College of Music where she studied with Rosa Mannion. This is her second appearance at the Minack after performing in last summer’s production of Monteverdi’s Orfeo.

An enthusiast for modern repertoire, Rose has also premiered a number of roles including Alice in Now by Lewis Murphy (RCM), Harlequin in Black Sand by Na’ama Zisser (Tête-à-Tête Opera) and Anne Brontë in Glassworks by Leo Geyer as part of Helios Collective’s workshop series ‘Formations’.

Welsh tenor Ryan Vaughan Davies is currently studying for his Masters at the Royal College of Music with Russel Smythe. He is the Ivor Llewelyn Foster Scholar generously supported by the Monika Saunders Award. Ryan made his professional debut as Second Priest in Longborough Festival Opera's production of Die Zauberflöte, conducted by Anthony Negus and directed by Thomas Guthrie. He has since worked with the La Serenissima for their production of Tisbe in The Buxton International Festival and at The Grange Festival for their productions of Falstaff and Belshazzar, whilst understudying the role of Don Basilio in Le Nozze di Figaro. Ryan also enjoys singing on the concert platform with recent performances in the USA and Norway. He has recently worked at the Grange Festival on their production of Precipice, an outdoors promenade production by Sinéad O'Neill.

Timothy Dean was educated at Reading University and the Royal College of Music. He was Chorus Master and Head of Music for Kent Opera for ten years, conducting tours in the U.K. and abroad. In 1987 he was appointed Music Director, and subsequently Artistic Director, of British Youth Opera, working with young singers and musicians throughout the U.K. Having spent a year as assistant Music Director for the New D’Oyly Carte Opera Company in 1990, he went on to make company debuts with English National Opera and Scottish Opera. He was also conductor of the London Bach Society in the late 1980s, and Director of the RSNO Chorus from 2006 to 2014.

In 1994 he was appointed Head of Opera at the Royal Conservatoire of Scotland, conducting over fifty new productions. He was made a Fellow of the RCS in 2010 and subsequently a Professor of the Conservatoire. He led collaborative projects with the Conservatoire of Rostov-on-Don in Russia, culminating in performances of a new edition of Prokofiev’s ‘War and Peace’ in 2010, which subsequently received a Royal Philharmonic Society Award nomination. He is Artistic Director of both the Royal Conservatoire’s ‘Song Studio’, creating and giving concerts with young singers all over Scotland, and of RCS Voices, a vocal ensemble created to perform early and contemporary repertoire, broadcasting on BBC Radio 3 and appearing at the Edinburgh, St Magnus and Cumnock Tryst Festivals.

In 2018 he relinquished his full-time position in Scotland to move to Cornwall, and continues to be active as coach, accompanist, adjudicator, conductor and chamber musician.