Didjan is the name given to the small morsel of pasty left for the buccas or mine spirits by Cornish miners, in the hope of ensuring safety when working underground. Bec Applebee and Richard Trethewey are two people with whom Cornish music is definitely in safe hands! Individually Bec and Richard have a wealth of experience playing at the highest level at the forefront of Cornish music in bands such as Dalla, The Rowan Tree, The Grenaways and Tosta and have taken their vision all over the world from village halls to the Royal Albert Hall to the largest Celtic festivals in the world!

Bec and Richard are passionate about telling the unbelievable stories of remarkable characters that have given Cornwall such a strong sense of identity and made the Cornish who we are today. Didjan have a creative approach to their music, incorporating a wide variety of tools such as fiddle, cittern, crowdy crawn, voice, spoken word and dance. Whilst a small morsel, Didjan create a sound and vision that goes beyond their number and are already creating a wave of excitement for what is to come!

Didjan were joined by award winning songwriter Kris Lannen of 'Brother Sea' for this event.

Gannets dived into a deep blue ocean and sunlit gulls swooped low on a perfect Cornish summer evening in the company of a folk trio that celebrated the best of local musical creativity and characters with an audience of mainly holidaymakers.

It was a great choice to include Bec Applebee and Richard Trethewey of Didjan, along with their special guest Chris Lannen, in a post-pandemic-lockdown programme to replace the intended main season list.

All three singers and songwriters are woven into Cornwall's recent history, with their involvement in the creation of The Mousehole Cat, the hugely successful touring musical, and their link in promoting the spectacular Man Engine, and the Duchy's mining past.

In fact, the name Didjan, refers to the small bite of pasty saved for the buccas, or mine spirits, by each man eating his dinner underground, with a prayer for safe deliverance.

Many of the songs were sung in Cornish, and also looked back, with a tribute to Richard Jose, born in Lanner in 1862, with a counter tenor voice that contrasted with his massive frame, who won international fame, after his family moved to America.

And bringing us up to date, Find Me At Home, was dedicated to the Covid-19 pandemic.

Chris, the surfer and songwriter from Scotland, who came to live in Cornwall 25 years ago, basing himself close to Polzeath on the north coast, made the gig despite being "smacked in the face" by his paddleboard earlier in the day at Praa Sands, where it was "blowing a hooley".

The songs ranged around places, from the Lonesome Track of Malpas near Truro, to the Isles of Scilly Bishop Rock lighthouse, and back again via a poem about the mining stacks of Carn Brea, to St Austell and old favourites including Camborne Hill and Away Down To Lamorna.

Bec will be presenting her acclaimed show outlining the extraordinary life of an18th century Cornish highwaywoman, titled Oh Mary! at the Minack from September 9-12.

She showed a pretty pair of heels too, during a jig in wooden Cornish clogs, with Richard accompanying on fiddle.

Altogether, it was a very delightful evening, and that includes the show!

The award-winning Stones In His Pockets, which was a hit at the theatre last season, has returned and will run until Saturday. (Aug 15) For performance details and tickets see Minack At A Glance. 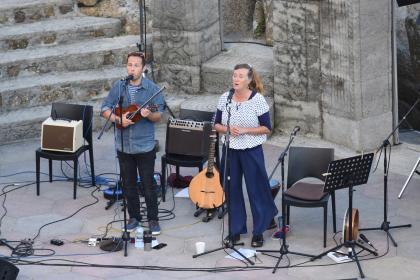 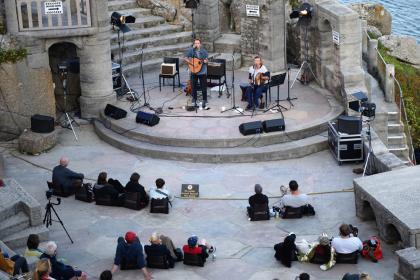 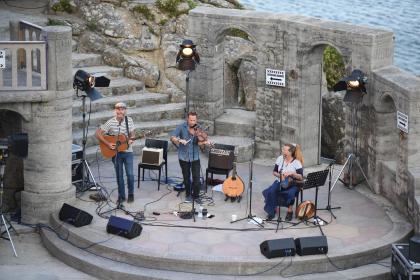 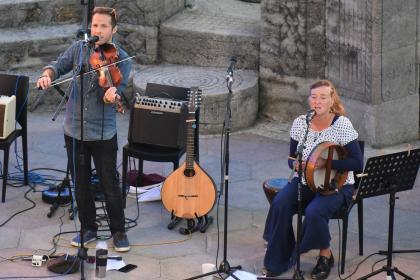