A one man performance by David Mynne

Joy to all mankind? Bah!

Watch horrified as Ebenezer Scrooge is haunted by four creepy ghosts (wooo-oooh) each one more terrifying than the last. Bah!

Sob at the bedside of a tiny, malnourished child riven with rickets. Bah!

In their inimitable style, the team that brought you Great Expectations, Dracula and The Odyssey will now take you on a grim (sort of) journey through the dark, dismal streets of Victorian London.

This is Dickens’ original words with added silliness. Silliness?  Bah!

"A Christmas Carol was beautiful - apparently simple theatre with just one actor but you go home remembering a cast of dozens! He is a genius.”
Richard Wolfenden-Brown: Director The Plough Arts Centre

Lots of us are thinking bah! humbug! - with festive plans demolished by a mutating virus. But everything is put into perspective when we consider what a sad time Bob Cratchet and his family faced in Victorian England on Christmas Eve.

His son, Tiny Tim's sickly and under-nourished body was racked by a rickety, rather than a Covid-19 cough, caused by desperate poverty that threatened to claim his life inside a year.

Charles Dickens wrote about the family in London's Camden Town in 1843, and children all over the world have shed tears ever since over the plight of dear Tiny Tim and a Dad who is determined to make the best of very little.

It took visitations from no fewer than four ghosts to persuade the mean and grasping Ebenezer Scrooge that it was high time to step in with a little help for his friends, his family, one or two charities and his employee Bob Cratchet, in particular.

A Christmas Carol was an instant hit all those years ago, and today it feels especially relevant at a time when everyone is sharply aware of imposed isolation, of a crushing shortage of funds, of the tragedy of losing a member of the family, and more positively the need for love and compassion all round.

It was the perfect choice of production for the Minack, with David Mynne from Penzance, transfixing us with a one-man performance that would surely have impressed Dickens, who loved to give readings in just the same way, taking on all the characters and giving it everything.

Luckily for us, David and director Simon Harvey share a sense of fun that lightens this adaptation by Andrew McPherson.

Tiny Tim is presented as a  puppet, using a woolly white scarf with its bobble representing his head!

Tim is indeed tiny, as is the imaginary goose that is minutely 'sliced' to feed the many Cratchets.

David's imagination, the miming, and his ability to 'become' each character in this story of redemption is captivating. In fact, if a recently spotted hump-back whale had surfaced just below the Minack cliff, I really don't think I would have noticed.

Mind you, a whale might well have been entertained by the imaginary objects that found themselves booted or hurled over the cliff.

As Scrooge, David oozes meanness, his lips curl, his face is screwed tight around a scowl beneath crunched and lowered brows, and when his nephew suggests "giving" he reacts by clutching at his cold heart, as if the word hurts.

As the ghost of Jacob Marley, his face elongates and he emits a howl  -  it is an exact match for Edvard Munch's famous anguished portrait  -  The Scream.

And all the time, he adds to the atmosphere of the piece by introducing his own sound effects, the bubbling of gruel in the pot, the kerchink-clank of a chain dragging up a stair, the muffled whoosh of a ghost appearing through a locked door, and the whistle of the wind - which wasn't strictly necessary on an open air stage in December!

We might have sat down thinking bah! humbug! but by the end of this treat of a performance, we were all ready to join Tiny Tim in saying  - God Bless Us, Everyone! 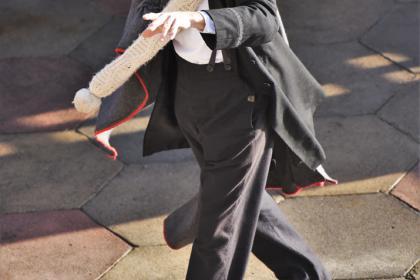 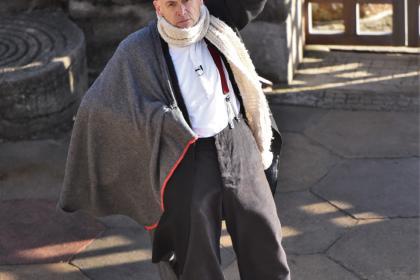 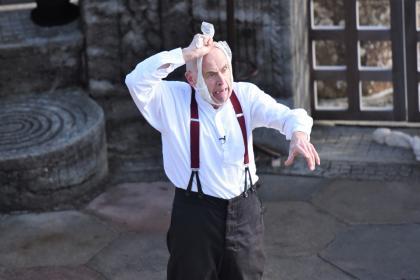 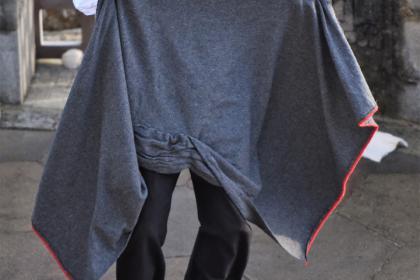 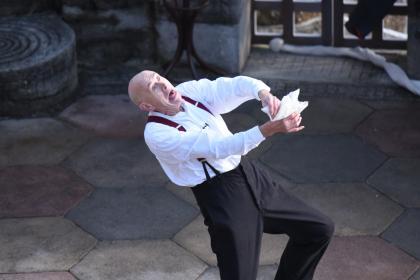 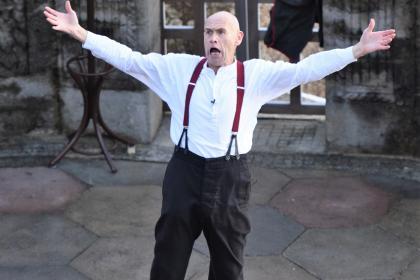 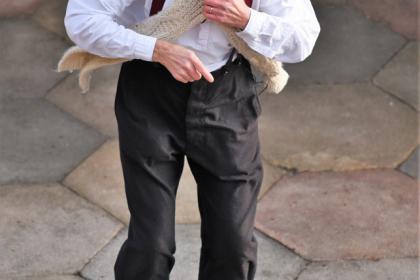 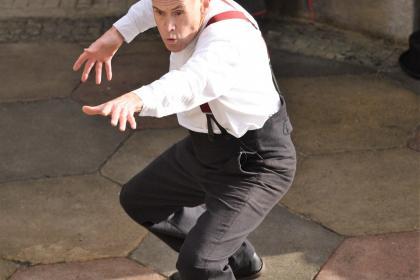 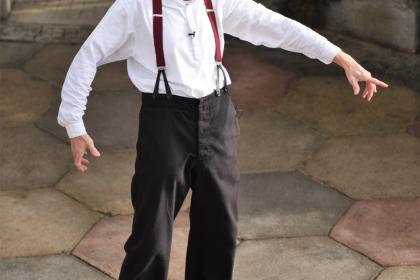 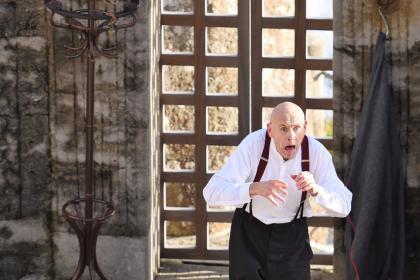 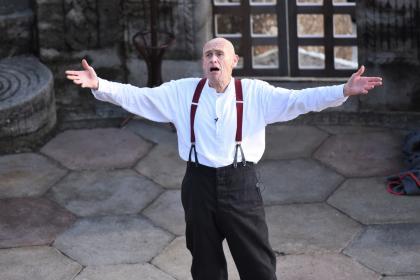