The imperious Court of King Henry VIII clap their hands in unison to command our attention from the outset, as thunder rolls and trumpets herald the entrance of regally-clad characters who stride onto the stage to enact a story of historic intrigue that has fascinated us for centuries.

These are the early years of the 16th century, and Henry is desperate to produce a male heir, and will more or less move heaven and earth to try to do it, with the help of a man who was to become renowned for his “vigorous invention” – Thomas Cromwell.

Many know the story, but it was author Hilary Mantel who cleverly brought the Tudor court to life with imagined dialogue in her Man Booker Prize winning novel nearly 10 years ago, and actor Mark Rylance who enchanted us with his sensitive and often humorous television portrayal of the king’s remarkable chief minister..

Bringing this long play to an open air setting is no small challenge for the north London based Tower Theatre Company director Dan Usztan and his amateur cast, but they are more than up to it.

The players, richly adorned in jewelled velvets, furs and brocades look impressive, and so is their acting – mainly square-on to the audience, every word clearly and precisely projected against a dramatic and compelling sound score by Rob Ellis, operated by Penny Tuerk.

The set is simple, with discrete royal trimmings, but it is the court gossip that grabs us. Henry has bought an emerald “the size of a sparrow’s egg” to be set in to a ring  –  for whom, asks Lizzie Cromwell of her well-informed husband, as they tut over the brevity of a letter sent home from their son.

It is that home setting at Wolf Hall, and Cromwell’s love for his wife, that gives us a personal insight into the character of this blacksmith’s son, whose scheming flexible intelligence will make him one of the most influential men in England.

The Court and its aristocrats never allow Cromwell to forget his humble origins, or Cardinal Wolsey of his, as they spitefully vie for the attention of the King.

Adam Sutcliffe, resplendent in scarlet and ermine as the portly Wolsey, who is mocked for his constant hunger, gives a very fine performance, alongside Dickon Farmar, the shaven-headed Cromwell, who is lean and hungry in a very different way, for power.

Farmar hardly leaves the stage, but makes the acting look easy, deftly switching from grief to cold-blooded straight-talking calculation, as he takes on the frustrated majesty of Martin Mulgrew as Henry, and the bullying aristocrats, notably John Chapman as the Duke of Norfolk, with Guyene Muneesamy, Grant Campbell, Jon Foster and Jonathan Norris.

The bishops and archbishops are just as troublesome to him, especially Will Howells as the sneering Gardiner, Julian Farrance depicted as a self-flagellating More, Alistair Maydon as a snoozing Warham, and Paul Isaacs as Cranmer.

Samuel Currie-Smith, is spot-on, doubling as both Cromwell’s son and as the spoilt and infatuated Harry Percy, who is wisely advised that as a possible former lover of the soon-to-be Queen, Anne Boleyn, “the past changes all the time”.

Sophie King is beguilingly powerful in the role of Anne, and Helen McCormack as Catherine of Aragon is given strength in humour by Mantel’s pen, as she promises Cromwell that she and her daughter Mary will “tidy ourselves away, if Henry becomes a monk”!

Jessica Hammett is wonderful as the formidable Lizzie, and there is fun to be had with the petulant musician Mark Smeaton and his lute, and Adam Hampton-Matthews as French boy Christophe.

Costume designer Haidee Elise and her considerable team must be congratulated for gloriously dressing the Court in the manner to which they are entitled, along with Jude Chalk in charge of the set, and a very efficient stage manager, Dinah Irvine. 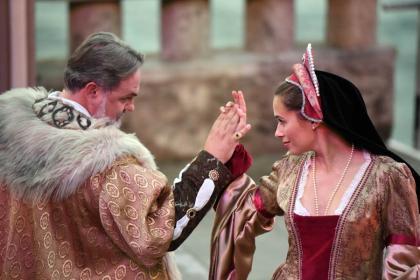 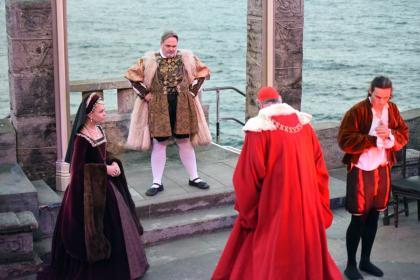 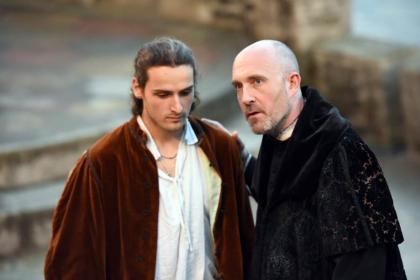 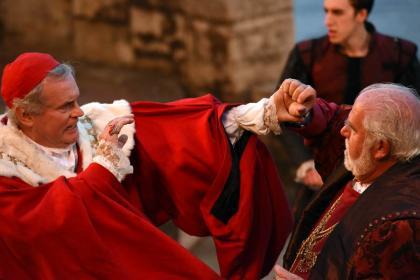 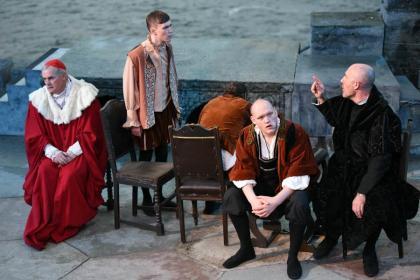 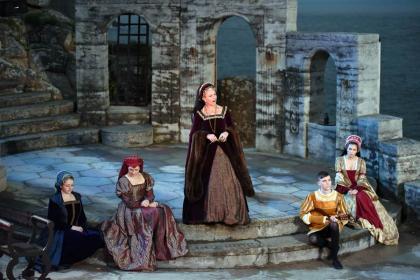 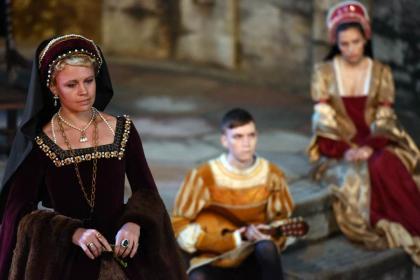 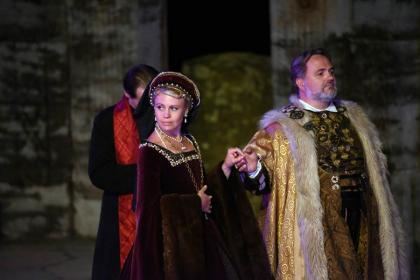 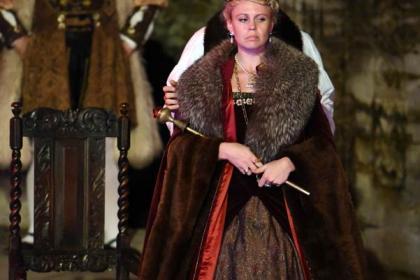 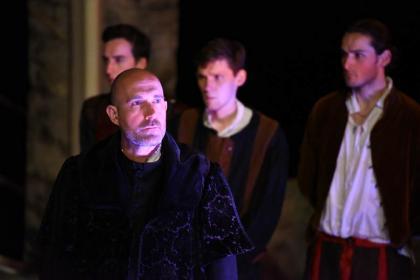 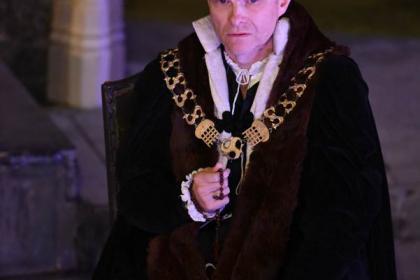